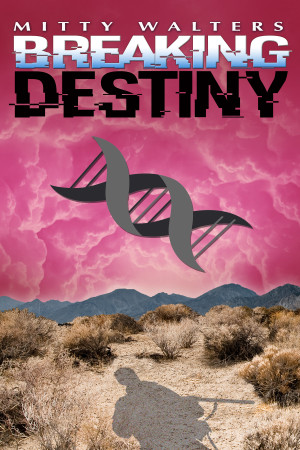 By Mitty Walters
On the run from a wife who wants him dead, detectives who want him for a double homicide, and a tumor that wants him for an early grave, Joe Kettleman slips away to a remote cabin in New Mexico. Lost in the middle of nowhere, he comes across town. And it’s not on any map…
❝ A clever, rousing novel… ❞ ~ Kirkus Reviews
. More
WHAT IF WE COULD LIVE FOREVER?
When her discovery makes headlines around the world, Dr. Yoonie Brandt becomes an instant celebrity. But her study is soon attacked and ferociously discredited.

The headlines vanish overnight. So, too, does the young geneticist.

Three years later, wealthy businessman Joe Kettleman is on the run from a wife who wants him dead, detectives who want him for a double homicide, and a tumor that wants him for an early grave. Badly wounded and out of options, he slips away to a remote cabin in New Mexico.

When supplies dwindle, Joe is forced to take a perilous journey through the deserts of the Bisti Badlands. Two days into what was supposed to be a five day trek, he comes across a town.

A small city, really. Right in the middle of nowhere. And it's not on any map.

That's when Joe's fate collides with that of a beautiful young woman, desperate to escape the strange city and making wild claims about a genetically-enhanced pandemic that will soon wipe out most of humanity.

Yes, Mitty Walters is a pen name. It's a tribute to the classic, not the recent. When I read that story, I was a homeless teenager who was never sure where he would be sleeping the next night. I had an instant connection with Walter Mitty. But I always felt like his dark reflection. Walter's wild fantasy life helped him to escape his boring reality. But my fantasy was just to have a boring reality.

The truth is I joined the Merchant Marines when I was fifteen. When they asked for ID, I gave them my dead cousin's birth certificate. Next thing I knew I was on a bus headed to Savannah. When I hopped my first freighter, my heart was filled with all kind of romantic notions. But three straight days of puking cajoled me back to reality. I didn't set foot on land for another four months.

The Merchant Marine is not some mysterious gateway to adventure for young lads. It's just work, sweat, and misery. I didn't get marooned on any island, didn't rescue any damsels in distress. I just toiled away pointlessly. The most adventure I had was getting arrested in Thailand with a bunch of drunken idiots that I didn't even know. I learned to speak a little Cantonese while I was in there, though. I wasted away for a eighteen months, until the riots began.

Look. You can be honest. You don't care who I am. You just want to go on wild ride. I'm cool with that. Let's do dis, yo. Just pick up the book and let's bounce.

You have subscribed to alerts for Mitty Walters.

You have been added to Mitty Walters's favorite list.

You can also sign-up to receive email notifications whenever Mitty Walters releases a new book.