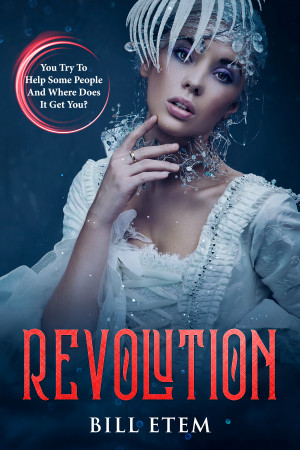 By Bill Etem
Princess Cassandra must escape a medieval fantasy city or else she will be forced by the king to marry a man she detests. She's aided by a chaperone, Johanna, who faces a painful form of execution if captured helping the princess defy the king. They take five orphan kids with them in their flight. The 7 of them face brigands, cannibals, cruel monks and the gales of winter during their escape. More
There is no religion in this novel aside from some symbolism. It's an adventure story. No preaching.

Suppose a kid asks you what steps he must take to escape hell and to attain heaven. Those of us who are Christians will tell the kid to embrace Christianity, and Christianity, at its very heart, pushes scriptures which say Jesus is God: Matthew 1. 23, John 1. 1-14, 1 Timothy 3. 16 etc.

The Book of Revelation is very clear in saying, in so many words, that the Antichrist and his followers will have an evil mark on their foreheads or right hands. This is the mark of the beast. So, if you have no mark whatsoever on your forehead or right hand then you can't possibly be shipped off to eternal hellfire for the sin of having the mark of the beast on your forehead or right hand. Now some might claim that God has spoken to them, and these people might say that God says that the cross is the seal of God mentioned in Revelation 9, and they might say that God says everyone must have the mark of a cross on their foreheads, during the great tribulation, in order to escape the torments described in Revelation 9.

My theory is that the smart strategy, during the great tribulation, is to never put any mark on your forehead or right hand, including or especially the mark of a cross. Chapters 1 and 2 of my Constitutional History of the Western World run you through a brief history of the evils under the sign of the cross. That book gives evidence saying every church under the cross leads people to perdition because they all make a mockery of 1 Corinthians 11. 27-9.

So, if a kid asks you how he can attain heaven and escape hell, and if you're telling a kid the cross is sacred, but if it turns out the cross is evil, then you're leading the kid to hell by leading him into sacrilege.

On the other hand, suppose the cross is sacred to God. Suppose, furthermore, that someone like the Pope or some Protestant clergymen say they have spoken to God, and suppose God actually says that you must put the mark of a cross on your forehead, to escape the torments described in Revelation 9. Then that's what you have to do to escape the torments.

But then, on the other hand, suppose God didn't say any such thing, suppose the devil masquerading as God gave false info to some clergymen. Suppose the truth is the cross is evil, suppose one will burn in hell forever and ever if one puts the mark of a cross on his forehead...

Anyway, if a kid asks you right now, prior to the great tribulation (see Revelation 18) how he / she can escape perdition and attain heaven, then you'll have to address the issue of the cross, right now. Do you tell the kid to embrace the cross or to get rid of it? If you lead a kid into sacrilege on the issue if the cross then you certainly put yourself on the road to perdition.

You have to look to the future, to the great tribulation, to the time when the Antichrist is on the earth, to the time when the 3 angels from heaven mentionen in Revelation 14. 6-11 are here on earth, and you have to ask yourself: is putting the mark of a cross on your forehead a good idea or a bad idea?
Download: epub mobi (Kindle) pdf more Online Reader
lrf pdb txt
Price: Free! USD
Add to Library
Create Widget
Tags: adventure young adult medieval fantasy
About Bill Etem