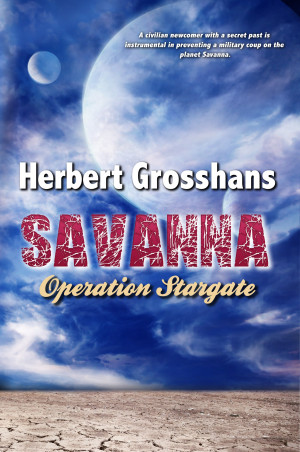 By Herbert Grosshans
Assuming the existence of a Star portal on the planet Savanna to be a secret, the humans don’t know that the Accilla, the Spiders, and other spacefaring races are fully aware of it. Jeremy Sheppard, a newly appointed Captain of the Solar Space Force to the military outpost and Dennis Collins, a civilian, must join forces to thwart a conspiracy to control the Star portal. More
The location of the planet Savanna is far from ideal. Too far from the regular trade routes of the Union and too close to Spider-controlled space. The only reason the Trading Commission showed an interest in Savanna was the discovery of huge deposits of blue diamonds. When the Trading Commission requested protection, Military High Command was more than reluctant to set up an outpost. However, the request was made by one of the most powerful companies in the Solar Union, which left them no choice. Since nobody volunteered, the military commanders requisitioned a bunch of misfits; Troopers who refused to fit in with the rest, most of them known troublemakers. Immigrants and fortune hunters soon followed.
When a group of miners discovers a Star portal in the mountains, newcomer to the Military Outpost, Captain Jeremy Sheppard, gets involved in a conspiracy that may threaten the peace between the humans and the other spacefaring species in this sector of the Galaxy. Only outside interference can upset the fiendish plan. He finds unexpected aid from a civilian, Dennis Collins, also a newcomer to Savanna. Trying to start a new life for himself and his family, Collins soon finds out conditions are not exactly the way Immigrations painted Savanna. The Trading Commission controls everything and the indigenous population is hostile toward humans. After experiencing a personal tragedy, his desire for revenge takes him on a journey of discovery that will change his life and the planet Savanna forever.
Available ebook formats: epub
Price: $4.99 USD
Buy Add to Library Give as a Gift
How gifting works
Create Widget
Tags: adventure action fantasy space travel shapeshifters alien contact alliens
About Herbert Grosshans

I am a writer. I write mainly Science Fiction, but I also dabble in other genres. Most of my stories contain Erotica and are written for adult readers.

Some of my other interests and hobbies are reading (of course), hunting and fishing, drawing, gardening, making wine (and drinking it), tropical fish. I enjoy traveling with my wife, spending time with my children and grandchildren.

Reviews of Savanna by Herbert Grosshans

You have subscribed to alerts for Herbert Grosshans.

You have been added to Herbert Grosshans's favorite list.

You can also sign-up to receive email notifications whenever Herbert Grosshans releases a new book.