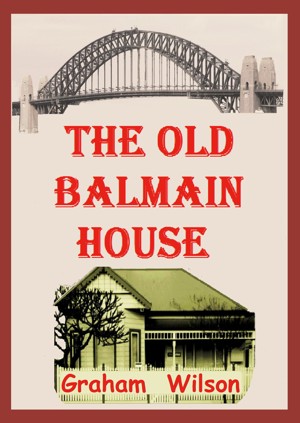 By Graham Wilson
Rated 4.50/5 based on 4 reviews
Sophie vanished - where did she go? For 100 years nobody knows.

A photo of 8 year old Sophie and an antique perfume bottle are found in the fireplace of an old house.

The story of a Balmain family over 170 years. Finally they uncover what happened.

Set around beautiful Sydney Harbour this is a story of this place and its people, an imagined history from early Australia to the present day More
Sophie vanished - where did she go? For 100 years nobody knows.

A photo of 8 year old Sophie and an antique perfume bottle are found in the fireplace of an old house.

The story of a Balmain family over 170 years. Finally they uncover what happened.

Set around beautiful Sydney Harbour this is a story of this place and its people, an imagined history from early Australia to the present day

Who was Sophie and what happened to her? On buying an old weatherboard house in Balmain, Sydney, we discover her photo, dated 1900-1908, long hidden, along with a small perfume bottle in an old fireplace. Then we discover that Sophie disappeared with a childhood friend in 1908 and was never seem again, leaving a trail of sadness through generations of her family.

This book tracks the journey of the discovery of Sophie and her family, from their first arrival in Sydney, over five generations of the family, until the mystery is finally laid to rest.

It is a story of loss and grief, mixed with joy, which passes through the successive generations of a family. The way the family deals with unresolved tragedy and finally the the way their love transcends time is the story from which the real Sophie emerges.

Graham Wilson, the author, lived in the house in Balmain around which this story is based for seven years, before moving to Millers Point. This is his first novel.

He has also written a family memoir. Arnhem's Kaleidoscope Children

The first series starts with a novel called Little Lost Girl, based on an old a weatherboard cottage in Sydney where the author lived. Here a photo was discovered of a small girl who lived and died about 100 years ago. The book imagines the story of her life and family, based in the real Balmain, an early inner Sydney suburb, with its locations and historical events providing part of the story background. The second novel in this series, Lizzie's Tale builds on the Old Balmain House setting, It is the story of a working class teenage girl who lives in this same house in the 1950s and 1960s, It tells of how, when she becomes pregnant she is determined not to surrender her baby for adoption, and of her struggle to survive in this unforgiving society. The third novel in this series, Devil's Choice, follows the next generation of the family in Lizzie's Tale. Lizzie's daughter is faced with the awful choice of whether to seek the help of one of her mother's rapists' in trying to save the life of her own daughter who is inflicted with an incurable disease.

The Crocodile Dreaming Series comprises five novels based in Outback Australia. The first novel Just Visiting.is the story of an English backpacker, Susan, who visits the Northern Territory and becomes captivated and in great danger from a man who loves crocodiles. The second book in the series, The Diary, follows the consequences of the first book based around the discovery of this man's remains and his diary and Susan, being placed on trial for murder. The third book, The Empty Place, is about Susan's struggle to retain her sanity in jail while her family and friends desperately try to find out what really happened on that fateful day before it is too late. In Lost Girls Susan vanishes and it tells the story of the search for her and four other lost girls whose passports were found in the possession of the man she killed. The final book in the series, Sunlit Shadow Dance is the story of a girl who appears in a remote aboriginal community in North Queensland, without any memory except for a name. It tells how she rebuilds her life from an empty shell and how, as fragments of the past return, with them come dark shadows that threaten to overwhelm her. Graham has also just written a two part Prequel to this Series. It tells the story of the other main character, Mark, from his own point of view and of how he became the calculating killer of this series.

The book, Arnhem's Kaleidoscope Children, is the story of the author's own life in the Northern Territory. It tells of his childhood in an aboriginal community in remote Arnhem Land, one of Australia’s last frontiers. It tells of the people, danger and beauty of this place, and of its transformation over the last half century with the coming of aboriginal rights and the discovery or uranium. It also tells of his surviving an attack by a large crocodile and of his work over two decades in the outback of the NT.

Books are published as ebooks by Smashwords, Amazon, Kobo, iBooks and other major ebook publishers. Some books are available in print through Amazon Create Space and Ingram Spark

Graham is currently writing a new novel, "Risk Free'. It is a story about corporate greed and how a company restructures to avoid responsibility for the things it did and the victims it leaves in its wake.

Graham is in the early stages of a memoir about his family's connections with Ireland called Memories Only Remain. He is also compiling information for a book about the early NT cattle industry, its people and its stories.

Graham writes for the creative pleasure it brings him. He is particularly gratified each time an unknown person chooses to download and read something he has written and write a review - good or bad, as this gives him an insight into what readers enjoy and helps him make ongoing improvements to his writing.

In his non writing life Graham is a veterinarian who work in wildlife conservation and for rural landholders. He lived a large part of his life in the Northern Territory and his books reflect this experience.

These three novels are set around an old house in an inner city suburb of Sydney, Balmain. They tell the stories of two families who live in this house over successive generations and of their joys and sorrows.

The people and locations of Balmain, from early settlement to today, provide a backdrop to these stories

Reviews of The Old Balmain House by Graham Wilson

The Old Balmain House by Graham Wilson is a nicely told tale inspired by the sepia photograph of a young girl. The story is set mostly around the harbour side village of Balmain, in Sydney, Australia, where I used to spend holidays with my aunt, at her spooky Balmain terrace. So, as well as enjoying the story of the Rodgers Family, I was also transported back in time to the place where I spent wonderful times in my youth.
Having a convict in the family tree, and having lived some of my life in Newcastle, also added to my connection to this imaginative yarn of loss and resilience.

I loved this book.It is one of those books that is both beautiful and sad at the same time, so poignant and moving as the story comes together.

It will live in my mind as one of the loveliest books I have read this year.
A simple family story and yet with much more besides.

I really encourage others to read and keep reading. The second half of this story is wonderful

A truly gorgeous love story with characters so real you feel you know them as friends.Set in a vividly drawn early Sydney this story of heartbreak love courage and hope springs to life as it tells just what it meant to try and struggle free from a convict heritage .Handsomely researched this was a great read.

While it took me a little while to get into, once I did I really enjoyed and found myself very moved by the later parts of the story as the parents search for their lost child and finally her distant descendants discover what happened.

Also as someone who has visited Balmain I enjoyed the descriptions of this historic part of Sydney.