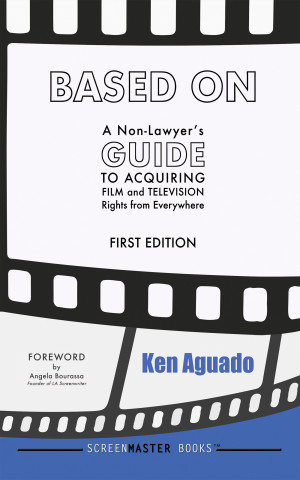 Based On: A Non-Lawyer’s Guide to Acquiring Film and Television Rights from Everywhere

“In the ever-growing, ever-changing modern media landscape, intellectual property is king. But is it really possible for a neophyte writer, director, or producer to acquire the motion picture or television rights to a book, play, comic book, video game or life rights for real people? The answer is yes – and with this book, Ken Aguado tells you how. In clear and concise language intended for non-lawyers, ‘Based On’ explains how to track down rights-owners and negotiate the deals you will need to turn underlying material into movies and television shows… and in the process, give you that crucial advantage to succeed in an incredibly competitive industry.”
-Douglas J. Eboch (screenwriter, Sweet Home Alabama)
Available ebook formats: epub mobi pdf lrf pdb txt html
First 15% Sample: epub mobi (Kindle) lrf more Online Reader
pdb
Price: $7.99 USD
Buy Add to Library Give as a Gift
How gifting works
Create Widget
Tags: television text book motion picture media deal entertainment industry film rights film school film and television rights ken aguado
About Ken Aguado

Ken Aguado has been working in Hollywood for over 25 years as a studio executive, producer, author and screenwriter. His most recent credits include the acclaimed documentary “Miracle on 42nd Street” (2017) and the drama “An Interview with God” (2018), which he also wrote. He has produced many other films, including “The Salton Sea,” “Standing Up” and “Sexual Life.” Ken is the co-author of the top-selling textbooks "Based On" and “The Hollywood Pitching Bible,” now in its third edition. He is a frequent guest speaker at film schools and entertainment industry events around the country and around the world.

Reviews of Based On: A Non-Lawyer’s Guide to Acquiring Film and Television Rights from Everywhere by Ken Aguado

You have subscribed to alerts for Ken Aguado.

You have been added to Ken Aguado's favorite list.

You can also sign-up to receive email notifications whenever Ken Aguado releases a new book.