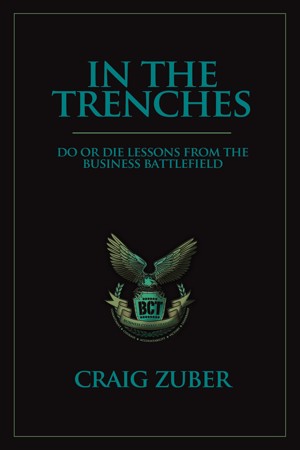 In The Trenches (Do or Die Lessons From The Business Battlefield)

By Craig Zuber
Craig Zuber takes the discipline and accountability of the US Marine Corps into the business world with the publishing of his cutting-edge business guide, In the Trenches: Do Or Die Lessons From the Business Battlefield.
This book delivers down & dirty, no excuse sales principles and gives you the insight & motivation to accomplish your mission!

Craig Zuber is a business coach, author, speaker, top-producer in residential real estate, creator of the Business Combat Training Program, and most importantly—a Marine.
Zuber grew up in central California and started his first business at age 10, selling candy to classmates using his school locker as a storefront. He did well right through 7th grade, until the school realized how much his operation was directly affecting their bottom line and shut it down.
As president of Zuber Group, Inc., Zuber currently leads one of Idaho’s most successful real estate teams.
During his very first year in real estate, Zuber made $9.8 million in sales. How? By taking everything he learned in the United States Marine Corps and translating that discipline and life-or-death execution to business success.
A born competitor, Zuber was a 1st team all-league MVP in baseball during high school, even once playing against Alex Rodriguez in Reggie Jackson’s Upper Deck Classic tournament. He turned down a baseball scholarship to join the Marines in 1993. He enlisted in the US Marine Corps to serve the country he loves, the best nation on Earth, the land of opportunity where anyone is free to become whatever he or she is determined to be. Military principles and discipline left an indelible mark on Zuber’s life and business practices.
Nobody gets to the top alone. Zuber could not have made it without the courage, vision, and sheer grit of his partner in work and in life, Nicole Zuber. Not only did Nicole support her husband’s move into real estate, she charged right in with him, becoming a realtor herself, learning the ropes, researching markets, zeroing in on the best place to create a thriving business and raise their children. The couple now resides in Boise, Idaho, where they are the proud parents of Zac (6) and Aspen (3).
Zuber has been spending a lot of his time championing the cause of seeing military personnel effectively transition into the workplace once they leave active duty. There are nearly 500,000 individuals annually who find themselves in this position. With their leadership and training, Zuber believes that many of them have the abilities to be successful entrepreneurs and business leaders. Zuber’s mission is to provide them with a little guidance to uncover 10 entrepreneurial principles that they learned in the military – and how to directly apply them to business ownership.
Zuber is determined to make sure their business is the next blockbuster success story, not the next casualty.

Your Marching Orders
***
If you know anyone affiliated with the military or currently stuck in the trenches, please refer them to this definitive guide.
www.inthetrenchesbook.com

Soldiers Impact
Soldiers Impact was created for one reason. To help our military men and women transition into successful entrepreneurs! They are the next great wave of American Business Owners! www.soldiersimpact.com

You have subscribed to alerts for Craig Zuber.

You have been added to Craig Zuber's favorite list.

You can also sign-up to receive email notifications whenever Craig Zuber releases a new book.