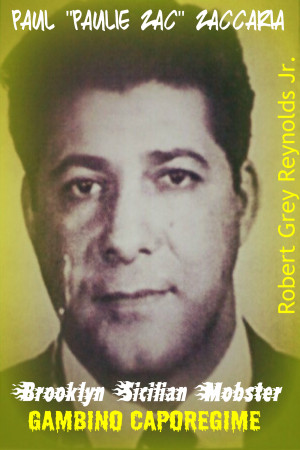 By Robert Grey Reynolds, Jr
Paul Zaccaria was taken into custody in a massive New York City Police raid in which thirty-five hoodlums were arrested. Mob associates connected to the Gambino and Bonanno crime families were seized. The raid was conducted on June 11, 1970. My e-book is helpful for tracing mob ties, Italian ancestry, as well as examining info about the unsolved murder of Zaccaria's father Calogero Carlo Zaccaria. More
Paul Zaccaria was a Gambino caporegime who became a mentor to mobster Michael "Mikey Scars" DiLeonardo. Paul was the son of Gambino associate Calagero Carlo Zaccaria who was associated with Olympio Garafalo. Carlo was underworld figure Salvatore D'Aquila's brother-in-law. My e-book looks at the Zaccaria's mob connections and their affiliate mobsters. Carlo Zaccaria was the victim of an unsolved Mafia hit in September 1948. A resident of Bath Beach, Brooklyn, he was murdered while seated with his wife on the front porch of their home.