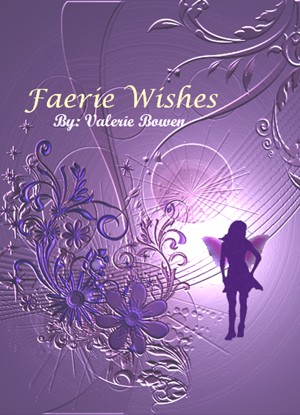 Talia soon discovers the grass is not exactly greener on the other side of the realm; as a matter of fact she discovers sometimes wishes can kill you. Will Talia find the love she craves in Cayden? Join her on her quest to find the love she desires and the realization that sometimes wishes do come true just not necessarily the way you had planned.
Available ebook formats: epub mobi pdf rtf lrf pdb txt html
First 20% Sample: epub mobi (Kindle) lrf more Online Reader
pdb
Price: $0.99 USD
Buy Add to Library Give as a Gift
How gifting works
Create Widget
Tags: young adult fantasy romance faerie
About Valerie Bowen

Valerie is originally from the beautiful state of Maine, where she lived until she was ten. Being young when she lived there she never appreciated the absolute beauty of the rocky coastline. Although she never live in Camden, she did have a very dear cousin that lived there and they would spend many hours in downtown Camden. When she decided to write For the Sake of Amelia she tried to imagine a great setting for the book. she thought of many places in Connecticut (where she reside now) but kept going back to her childhood and the many fond memories she held in her mind of Camden. 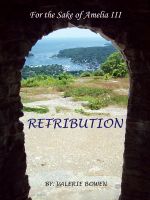 Review
Leslie Cawley reviewed on June 25, 2012
(no rating)
An interesting fantasy about wishing for something you think you want and finding out that what you are yearning for isn't that fulfulling after all. The main character, Talia, is a faerie who seems a little bored with her own life in the faerie realm, especially when she sees a handsome Cayden, who happens to be human.
The two eventually fall in love and for a short while Talia is granted a wish to transform into a human being but once she becomes one things get a little rocky. After becoming ill from eating, she realizes her true love with another faerie, Deaghan who has come back for her, in spite of an absence, and brings her back to be healed.
Her friend, Juniper helps Cayden get over his loss by introducing him to someone new, a young lady named Haleigh at a grocery story who has a small child. Both Talia and Cayden seem to be on the mend and realize that whatever hurt and pain they may carry in thier hearts, that love and friendship can help make life better.
Both are free to be happy again and enjoy thier worlds.

This Book Was Awesome I Love It The Passion Between Talia And Cayden Was My Down Fall I Fell So In Love With Them I Want More.

(reviewed 21 days after purchase)
DelSheree Gladden reviewed on May 4, 2012

Immortal, beautiful, peaceful, Talia lives a perfect life. But is perfect enough? Watching humans is fascinating to the faerie. They intrigue her to the point that she considers giving up immortality to join them. The heaviness of the choice holds her back until she happens upon one human male that brings new meaning to her life, and strengthens her desire to step away from peace and beauty. The other side of a wish is rarely ever as glorious as one expects, however…something Talia soon finds out.

Faerie Wishes is a young adult romance novel, centered on the dual existence of humans and fae. I would pin it down as more of a mystical, rather than paranormal romance. Faeries like Talia just don’t seem to fit into the same category as demons and vampires. Quite the opposite. Mixing the real world with myth and legend is obviously a hugely popular right now, but unlike many other urban fantasy or paranormal romances out there, the focus is more on the experience of the characters than the mystical, often dangerous aspects of whatever fantastic element is employed.

The relationship between Talia and Cayden is the main focus of the book. Within their romance, the central problem is whether or not Talia is going to give up her immortality and join Cayden in the human world. I enjoyed the simplicity of the romance, but at times I did wish there had been a little more than just the two of them. Later in the book (probably not until the last third) you find out that in the past Talia harbored very deep feelings for another fae. This was an interesting addition to the story, and added good conflict, but when Deaghan was introduced I immediately wondered why he hadn't been mentioned earlier.

So much focus was put on Talia and Cayden with no external conflict through most of the book. Even though their relationship was very sweet, I did feel like it lacked some intensity because I had no reference point to compare their feelings for each other. Had I known from the beginning that in the past that Talia loved Deaghan, but had been spurned, her finding comfort in Cayden’s arms would have taken on new meaning for me.

Another issue I had with their relationship was that the progression was very quick in the beginning, and then slowed down quite a bit. Talia sees Cayden the first time, and is intrigued, and then a few chapters later they are very much in love with each other. I’m not against love at first sight, but this felt very abrupt because there was very little lead-in to the sudden change. Then, for a large section of the book the relationship stayed fairly stationary, focusing mainly on Talia’s choice. I felt like the progression could have been a little more fluid. The climax was done well, but it could have been even more impactful if there had been additional back story and a consistent building up to that point.

This next comment may not be an issue for every reader, but for some it may be. I found the level of editing to be a distraction throughout the book. I know how hard it is to edit when you self-publish. My books have some typos in them that need fixing once I’m done with final exams as well. Even the last Robert Jordan book I read had a couple of missing words and misspellings. But when it is consistent and interrupts the flow of the book, it can affect readability. I don’t think the editing issues were so major that it made the book unreadable, but more thorough editing would improve the flow and keep the reader from getting distracted.

Having brought up these points, I did enjoy the book. It was a charming love story with interesting characters, and a good moral. I thought it was a good casual read, especially for the upcoming summer months. It isn’t the kind of love story that will have you zipping through the pages, but I think it will appeal to upper middle grade, younger teen, and reluctant readers. There is no sex and almost no language, so it’s great for younger ages. Reluctant readers will probably also enjoy the streamlined plot and smaller cast of characters. And let’s face it, most kids could use a reminder that the grass isn’t always greener on the other side.

"Faerie Wishes" by Valerie Bowen was a cute and sweet romantic fantasy read. I really enjoyed this storytelling by Ms. Bowen. Talia Saturnfrost was a fae and had dreams of living among the humans....becoming a human. After Talia meets and falls in love with Cayden (who was a human) she decides that this is what she wants and that is to leave her forest home and live with the human...Cayden. Her
best friend Juniper was not for her doing this...but Talia had her own ideas on this matter and she wanted this dream to become a reality for her. So,just how this all turns out you will have to pick up this novel. But I will let you
know that sometimes what you ask for may not be the best of you...as in this story. Sometimes some wishes can even almost kill you.

The characters in this story were outstanding.. For there was Tailia, Cayden, Juniper, Deaghan, Thorn, Arielle, Haleigh and Samuel. The author did a wonderful job in her storytelling of "Faerie Wishes." There were some twist and turns that were interesting... especially toward the end.

Will Talia and Cayden live happy ever after or will there be someone who will comes into this story and presents issues between them? Again you will have to read and find out for yourself. It will be worth the read to find out just how this 'wish' does turn out.

"Faerie Wishes" was a short, sweet fantasy romance that I did enjoy and I think if you are into fantasy you will like this good read.

You have subscribed to Smashwords Alerts new release notifications for Valerie Bowen.

You have been added to Valerie Bowen's favorite list.

You can also sign-up to receive email notifications whenever Valerie Bowen releases a new book.