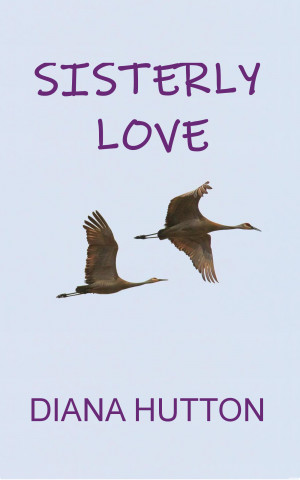 By Diana Hutton
Sisterly Love is about the unique bonds of sisterhood which wax and wane throughout their lifetimes. We follow the lives of two unalike sisters as they meander through the eras of their lives and places they inhabit while they come and go at will within each others lives, following the need of each sister to relate her memories and present. More
Sisterly Love is about the unique bonds of sisterhood.  ... Am I telling a story in this book?  It is certainly not a story with its conventional beginning, middle and end, although all that does happen in it.  But I have wanted to depict eras and places through the lives of two sisters and these come and go at will, following the need that each of the sisters has to relate her memories or to comment on her present.  So I suppose I could say that there is a story-line, but it is not conventionally told.

The story of their lives begins in the early years of the twentieth century with the usual sibling rivalries and disputes exaggerated by the presence of an obnoxious aunt and we revisit them after they make a parallel start with their secretarial careers - both the proper emancipated females of the nineteen thirties - it is there that the parallel ends.  For Elsie typifies the solid, conservative, hard-working office girl.  Lillian shifts with ease from one boyfriend to another, from one husband to another, from one boss to another, from one country to another, yet she always returns to take refuge by either Elsie's or Horace's (their young brother's) home fires. By dint of Lillian's wanderings, the novel moves from London to an English country village, to South Africa, to Australia, to Spain, back to London, all vividly evoked through reminiscence.

It is loneliness in their advancing years which forces them into each other's company, despite themselves.  It is the sadness of having nothing else in life which inevitably flings them against one another painfully peeling away the layers of their past existences and forcing them to surrender themselves to the irritating state of undesired dependence.

It is the inescapable pathos of two lives reduced by the passing years to grumpy proximity in a small bed-sitter that breathes life into Sisterly Love.  My aim was to write about the sadness of old age with a certain humour, but I have also tried to touch the chords of the reader's sensitivity.          D.H. Madrid, 2019

Diana Hutton lives in Madrid, Spain and has spent most of her career as a professional translator but has devoted the last few years to writing full-time. Her latest novel, "Sisterly Love" delves into the intricacies of the sister relationship in old age, treating the subject with remarkable humour and sensitivity. She is also in the process of working on a new novel.
Diana has written two other novels, "A Grave above Ground" and "Don't Call Me Lebohang" which can be purchased on Amazon. “A Grave above Ground” is also available as an audiobook at most retail audiobook outlets.

Although born in Southampton, in the United Kingdom at the end of the Second World War, Diana spent the first ten years of her life in London, then moved with her family to Sydney, Australia. She was educated there and dabbled in acting and contemporary ballet in Sydney on leaving school, then worked at the Australian Broadcasting Commission. As a young woman, she returned to London, but shortly afterwards moved to live in Paris where she met her Spanish husband-to-be whilst working in the Australian Permanent Delegation to UNESCO. She married in Madrid and has two grown up children. She has lived there on and off since 1970 and has found life in Spain to be a deeply enriching experience.

Diana has written three books:
"Sisterly Love" to be released 1 July 2019
“A Grave Above Ground” see excerpt in the following pages. Available everywhere and in Audio version
"Don't Call Me Lebohang" available from Amazon.

You have subscribed to alerts for Diana Hutton.

You have been added to Diana Hutton's favorite list.

You can also sign-up to receive email notifications whenever Diana Hutton releases a new book.