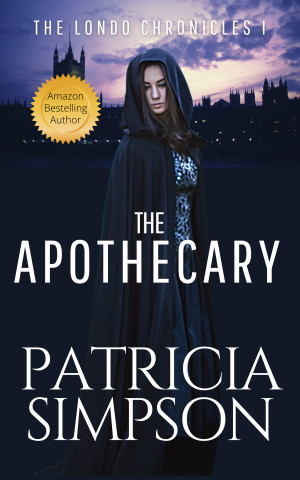 By Patricia Simpson
When the sister of model citizen Joanna Wilder goes missing, Joanna must turn to the dark side and trust a doctor who is hiding a secret that could destroy her. More
Joanna Wilder’s vow to protect her younger sister is put to the test when Eva vanishes five days before her government-arranged marriage. Has Eva run away with her forbidden lover? Or has she disappeared into the darkness of Londo City, never to be seen again—like so many others?

While Joanna searches for her sister, Eva’s heartbroken lover decides to blow up the Central Compound of Londo City. The explosion rocks Londo, and the ensuing rioters trample Joanna in the street. She drags herself to the clinic of Dr. Gabriel Stone—the only man who can save her life and the last person to see her sister alive.

What Gabriel does to keep Joanna from dying is something he can never reveal without breaking his own vow, made to his powerful brother, leader of Londo City. But the more he learns of courageous Joanna Wilder, the more he longs to tell her everything.

As Londo City descends into chaos for the first time in 500 years, Joanna and Gabriel discover their long-held loyalties shifting—in ways that will transform them forever.

Patricia Simpson is described by reviewers as “a premier writer of supernatural romance.” Author of numerous paranormal novels, she is inspired by science, paranormal phenomena, and archeological discoveries, and consistently garners superior ratings and awards for unusual heroes and unpredictable plots. Simpson has been called “a master at keeping suspense going on a multitude of levels,” and a “masterful storyteller.”

From Egyptian lords that shape-shift into black panthers to Scottish time-travelers who step out of computers, Simpson entertains readers while pushing the envelope in paranormal suspense. Her new trilogy, THE FORBIDDEN TAROT, goes further than anything she’s written before. This series explores a new world history and impending planetary disaster. Already some reviewers have called the first book in this series, THE DARK LORD, a “true gift to her readers,” and a “lulu of a story.”

Patricia’s favorite writing arenas are the Pacific Coast, the deep South, 18th century in America and Great Britain, ancient Egypt, Pacific Northwest Native Americans, and anything that goes bump in the night.

About the Series: The Londo Chronicles

The year is 2525, and the world is blanketed in a nuclear winter. In London, a handful of humans has survived, ruled by powerful Overseers. Society has been set back to 1900. Strict laws keep all citizens in check. Until one man decides he's had enough. His desperate act starts a cascade of events that rips Londo City apart and fractures longstanding loyalties—including those of the two brothers who rule Londo and two sisters who decide to follow their hearts, no matter the cost. As the sisters fight for their lives, they uncover dark truths about themselves—and the devastating secret behind human survival.

Try this series out for free by reading the short prequel, THE MARRIAGE MACHINE.

Also in Series: The Londo Chronicles

Reviews of Apothecary by Patricia Simpson

You have subscribed to alerts for Patricia Simpson.

You have been added to Patricia Simpson's favorite list.

You can also sign-up to receive email notifications whenever Patricia Simpson releases a new book.