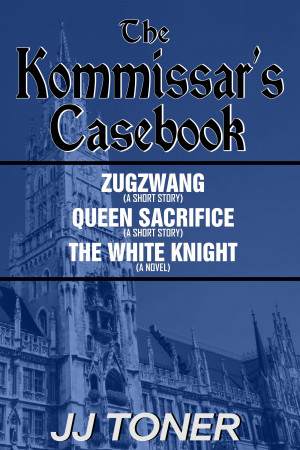 Zugzwang (a short story) 1933. Saxon investigates a serial killer on the streets of Munich

The White Knight (a novel) 1936. Saxon is drafted to Berlin for the Olympic Games where Jesse Owens is under threat More
The first three Kommissar Saxon stories, set in pre-war Germany.

Zugzwang (a short story): 1933. The Nazis have just gained power and have taken over the police forces all over Germany. A serial killer strikes three times on the streets of Munich. Saxon’s investigation is complicated by the presence of the SS.

Queen Sacrifice (a short story): 1934. Following the Night of the Long Knives, the Munich morgue is full of bodies. Saxon is prohibited from investigating any killings sanctioned by the Nazis. But are they all political killings or is there a connection to a missing schoolboy?

The White Knight (a novel): 1936. Detective Kommissar Saxon is living alone in Munich. His wife and son are out of harm’s way, in Austria. When ‘The White Knight’ threatens the US world record sprinter, Jesse Owens, Saxon is summoned to Berlin to help with security. Once again, the machinations of the SS and Gestapo make his job difficult. But he must protect the athletes, while holding the line with an unhappy wife in Austria.

Full time writer of short stories and thrillers since 2007. So far (2019) I have published eight novels and six substantial short stories: Uncle Tom, Tattooist, Zugzwang, Queen Sacrifice, Murder by Android, and Rogue Android. I live in Ireland with my wife and youngest son under a giant copper beech tree.

You have subscribed to alerts for JJ Toner.

You have been added to JJ Toner's favorite list.

You can also sign-up to receive email notifications whenever JJ Toner releases a new book.