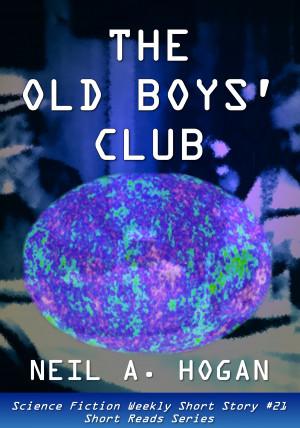 By Neil A. Hogan
Three old boys are having their monthly get together, discussing esoteric concepts over wine and beer, when they discover something that they had not recognized about the universe before.

Something that will change how they perceive their reality, forever.

The Old Boys' Club is #21 in the Science Fiction Weekly Short Reads series. A short story of approximately 4700 words.

www.StellarFlash.com
Join Captain Jonathan Hogart and his crew of aliens as they explore new civilizations in their interfrequency starship The Stellar Flash. Books in the series include 'Alien Frequency' and 'The Andromeda Effect' Book Three 'Temporal Incursion' is due out in 2019.

www.AlienDimensions.com
An anthology series featuring authors from around the world, edited by Neil A. Hogan. This series is now up to issue 16.

www.FantasyShortStories.com
A new anthology series currently in the works, with Book One due out in September 2018.

www.AlienCharacters.com
An illustrated and text only series for children, the Alien Characters have come together to explore the Large Magellanic Cloud and then cross the void to the Milky Way Galaxy. On the way they meet more aliens. The focus of the stories is about appreciated the differences people have and how they can work together to solve problems. There are over 28 illustrated books in the series and over 40 text-only stories with more on the way.

www.GalacticMissions.com
A novella series for young adults, it explores Earth's encounter with aliens, with the help of the Alien Characters who, after 70 stories in their own series, briefly help out in this one.

www.DinosaurCharacters.com
A limited series focused on intelligent dinosaurs living 66 million years ago and their discovery of an ancient dinosaur city.

www.ScienceFictionWeekly.com
A weekly science fiction series. Series one consisted of 13 short stories released over a 4 month period in 2017. A new series is planned for late 2018.

Learn more about Neil A. Hogan

About the Series: Science Fiction Weekly

You have subscribed to alerts for Neil A. Hogan.

You have been added to Neil A. Hogan's favorite list.

You can also sign-up to receive email notifications whenever Neil A. Hogan releases a new book.