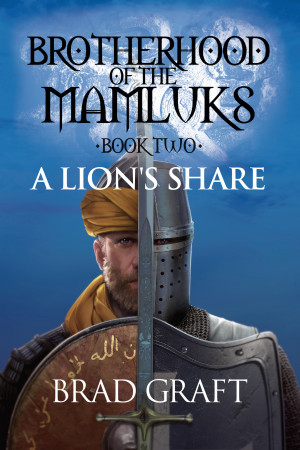 On the eve of a historic battle, Leander, a disenchanted Crusader, surrenders to Muslim amirs with the intent of joining the revered Bahri Mamluks. His move seems fated. The young Frenchman avoids the mass slaughter suffered by the Christian alliance and earns himself a place with the elite cavalry regiment, serving the Sultan of Egypt. Yet once King Louis IX of France seeks vengeance and sets Cairo as the objective of his campaign, Leander is faced with warfare against his native people as he defends his new home, comrades, and religion.

When the Bahri’s adored sultan dies and Leander becomes tangled in forbidden love with an Egyptian woman, his world unravels further. As the Mamluks seize rule for themselves, a rivalry between opposing regiments turns bloody and the newly-formed Mamluk Sultanate tumbles into chaos, with Leander and his mates scrambling not only for position within the realigned empire, but also for their lives.

Graft, a former U.S. Marine Officer who served in Somalia, reveals the fascinating story of the Mamluks and the intriguing history of the Mamluk Sword, the saber worn by Marines as part of their traditional dress uniform. Based on exhaustive research that took the author to Mongolia and the Middle East, the book is filled with vivid cultural details, battle accounts, and authentic characters.
Available ebook formats: epub
Price: $2.99 USD
Buy Add to Library Give as a Gift
How gifting works
Create Widget
Tags: middle east sultan military history crusades warriors thirteenth century christian warriors islamic fighters

Reviews of A Lion's Share: Brotherhood of the Mamluks (Book 2) by Brad Graft

You have subscribed to Smashwords Alerts new release notifications for Brad Graft.

You have been added to Brad Graft's favorite list.

You can also sign-up to receive email notifications whenever Brad Graft releases a new book.