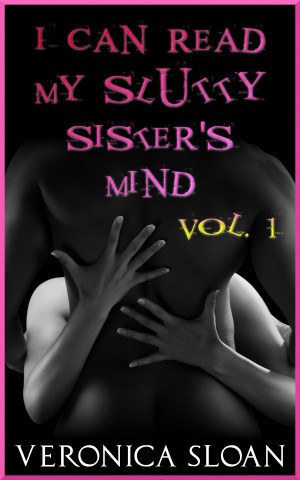 This tale of taboo telepathy is 9,000 words and for readers 18 and up.

Sienna fell into his lap with a contented sigh. Her wet hair spread over his jeans and her feet swung out to the far arm of the couch. She wiggled a little bit, and her shorts rode up to the swell of her behind. Ignore it, he told himself. Ignore everything. Just watch the movie.

For a little while, everything was just fine. But when the next steamy scene began, they both groaned aloud.

From her position in his lap, Sienna turned her eyes to his and offered a sweet, nervous smile. He chuckled and shook his head. “I swear I didn’t know it was this kind of movie,” he said.

Corey was about to tell her that he could fast forward the scene, that maybe they should watch something else in their queue, but as he opened his mouth her thought penetrated his brain like a crossbow bolt: I wish I was watching this alone.

Corey gaped at Sienna, his mouth hanging wide. He’d heard her voice. It was even clearer than when she'd spoken aloud.

In his lap, Sienna’s bashful smile turned to a moue of concern. “You okay?”

Before he could answer, the next thought splashed into his mind like hot bathwater: It’s never like it is in the movies. Gareth never kisses me like that.

Corey rubbed his forehead. Once again he’d heard the thought, and clearer than if she’d pressed her mouth directly to his ear.

Her eyes traced his face with sisterly concern. “Hey, did you hear me?” she asked.

“You . . . did?” That was what she’d asked aloud, but she’d said more than that. Hadn’t she? Was this what it felt like to be schizophrenic? Corey wasn’t sure what to say. How could he explain what he’d heard?

Sienna set her hand on his thigh and pushed herself to a sitting position. Her full lips canted into a crooked smile as she laid the back of her hand to his forehead. “Well, you don’t feel warm,” she said. “You looked sick for a second.”

Again, he opened his mouth to reply. Again, her voice filled his mind: You’re the one who’s warm, Sienna. And after all that time I spent in the bathroom.

This time Corey received more than her thought. His stomach, his entire rib cage, flared with arousal and shame. He knew the feeling, he’d felt it many times in her presence, but this feeling didn’t belong to him. It was hers, all hers - and somehow it had leaped from one sibling to the other!

As Sienna continued to speak to him, to ask him if he was feeling sick, her internal thoughts drowned her words out. She was carrying on two completely different conversations, trying to be a good sister while secretly wanting to just watch this dirty movie and let her fingers relieve her tension . . .

Veronica Sloan writes dirty stories and naughty romances. Her erotica is explicit and steamy, and no topic is too taboo. A Chicago girl at heart, Veronica graduated from the Columbia School of Journalism with every intention of writing very important things about very important people. Currently, she spends her days writing about pop culture and her nights writing about lusty men and women and their naughty predilections. She loves big dogs, hot yoga and songs that are stupidly catchy. Visit her at https://www.veronica-sloan-erotica.com/home/.

She’s baaaaack! This was deliciously depraved and I loved it. Can’t wait to read the next one!

You have subscribed to alerts for Veronica Sloan.

You have been added to Veronica Sloan's favorite list.

You can also sign-up to receive email notifications whenever Veronica Sloan releases a new book.