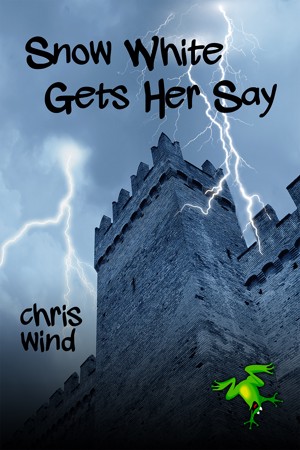 Snow White Gets Her Say

By Chris Wind
Rated 4.00/5 based on 2 reviews
A collection of the classic fairy tales retold – what would have happened if Gretel, Cinderella, Little Red Riding Hood, Snow White, Sleeping Beauty, and others had been strong and critical girls and women living today?

This is what happens is her latest work.

Soliloquies: The Lady Doth Indeed Protest is a collection of soliloquies delivered by Shakespeare's women, protesting the role given to them. The soliloquies formed the basis of a recent theatrical production, "Not Such Stuff", by Venus Theatre in Laurel, Maryland, and have also been used as audition pieces by many aspiring actresses. High school English teachers might also be interested in using the soliloquies in their Shakespeare units.

Thus Saith Eve is the second in a series of ebooks featuring women from various traditions. In "Thus Saith Eve", women from The Bible deliver critiques of their stories -- as if they had a feminist consciousness.

UnMythed is the third in the series. This collection of poems reveals the myths within the myths revealed: what might Pandora, Circe, Penelope, Eurydice, Persephone, the Gorgons, and others have thought and done if they had not been the creations of a chauvinist patriarchy? For poetry fans, especially feminist; of interest to scholars of Greek and Roman mythology; a good resource for English teachers who teach a Mythology unit.

Deare Sister is the fourth in the series, a collection of letters that might have been written by by Lady Godiva, Milton's daughter, Rubens' model, Mozart's mother, Freud's wife, Plato's students, and others -- assuming a feminist consciousness. (What would they say?)

Snow White Gets Her Say, the last in the series, is a collection of the classic fairy tales retold - what would have happened if Gretel, Cinderella, Little Red Riding Hood, Snow White, Sleeping Beauty, and others had been strong and critical girls and women living today?

The five ebook collections above appear in a single book (available in print as well as e-formats) titled Satellites Out of Orbit.

dreaming of kaleidoscopes is a selected 'best of' collection of wind's poetry spanning about fifteen years from the poet's late teens in the 70s to her early thirties in the 90s.

Paintings and Sculptures is a collection of feminist and socially conscious poetry, each piece describing a painting or a sculpture: some, a re-vision of a classic; others, an original work not yet realized. Michelangelo, Leonardo da Vinci, Dali, Botticelli, Monet, Rodin are among the artists whose work is re-imagined. Limited edition available in print directly from the author. LIMITED EDITION AVAILABLE DIRECTLY FROM THE AUTHOR.

Also, "Amelia's Nocturne" (see http://www.chriswind.com/for_ Amelia.htm) can be performed as a theatrical piece: a simple set consisting of a writing table with an inkwell and note paper, the music (live piano and voice in the corner) woven into the monologue.

Painters and sculptors -- I've been looking for the longest time for artists to 'actualize' the paintings and sculptures in Paintings and Sculptures for exhibit...if anyone's interested, contact me!

English teachers – consider using Soliloquies: The Lady Doth Indeed Protest for your Shakespeare unit and UnMythed for your myths unit.

chris wind has degrees in Literature, Education, and Philosophy.

Her theatrical works have been performed by Laurel Theater, Alumnae Theatre, Theatre Resource Center, Theatre Asylum, Buddies in Bad Times, and A Company of Sirens.

chris wind was a panellist at the Canadian National Feminist Poetry Conference (Winnipeg, 1992), and featured in an article in The Montreal Gazette (1994).

Lastly, chris wind is listed in “Who’s Who in Hell” (probably because of “Faith,” “The Great Jump-Off,” and Thus Saith Eve).

I loved the sassy voices in these stories, and the humor, even when making hard points.

The original tales (along with variants from different traditions) are in the appendix for reference.

It is unusual way of reading those stories that I loved reading as a kid, the original seems so familiar and traditional, while these versions show a more modernized way of telling the fairy tales. Some could see it as an active feminine roles. Not so much for kids telling bedtime stories, though.

You have subscribed to alerts for Chris Wind.

You have been added to Chris Wind's favorite list.

You can also sign-up to receive email notifications whenever Chris Wind releases a new book.