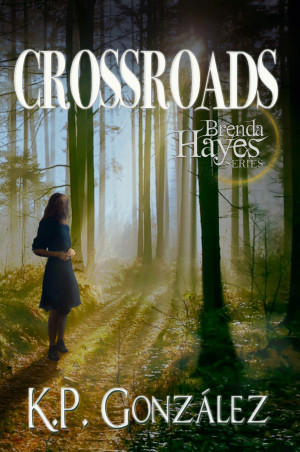 By K. P. Gonzalez
She never knew the power within her until it became a curse.

Karem Pérez is the mother of an 11-year-old girl and a 7-year-old boy. She loves outdoor activities, dancing salsa, reading and traveling. She currently works as a public relations officer in a non-profit organization in Puerto Rico. When Karem was a child, her uncle and godfather, a great storyteller, sparked her imagination with his spooky, supernatural stories. She loves those stories and her favorite holiday was Halloween because of the possibilities in creating and becoming different characters. Soon she was telling her own scary stories to her cousins, and she also began to write stories and poems as a hobby. In high school, her best friend requested personal poems for her boyfriend—who never clued in that they’d actually been written by Karem. Her story-telling and writing about both the supernatural and romance are now intertwined in her new novel, Crossroads, the first volume of a New Adult Paranormal Fantasy series, which features protagonist Brenda Hayes.

About the Series: Brenda Hayes

You have subscribed to alerts for K. P. Gonzalez.

You have been added to K. P. Gonzalez's favorite list.

You can also sign-up to receive email notifications whenever K. P. Gonzalez releases a new book.