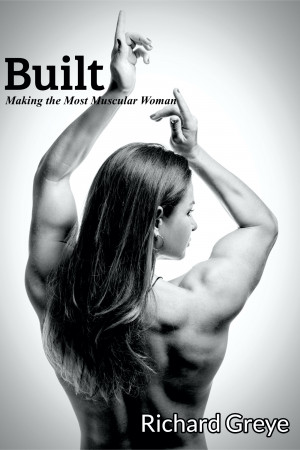 Built: Making the Most Muscular Woman

Reeling from losses, Andrew retreats from life unsure of how to go on. One thing he is clear about is his love and desire for muscular women. So when he meets Lizzy, tall and thin with haunting green eyes, she seems like an unlikely companion. Yet he is drawn to her.

Fighting her own demons, Lizzy seeks the security which physical strength can provide. Andrew has the resources to help her achieve these goals and surpass them. Soon Lizzy’s endeavors to build her strength consume her as she pushes to grow past normal limits. While she’s developing, her relationship with Andrew evolves, despite hurdles and hesitations.

When Lizzy’s desires collide with Andrew’s dream, will it be fulfilling love or too much to handle? As Andrew draws closer to a life with his ultimate muscle fantasy he'll have to wrestle with the question; is too much ever enough when it comes to women and muscle.
If his deepest yearnings come to fruition, can his pride handle his dreams?

Built follows the extraordinary evolution of one woman’s physique, highlighting how physical development can lead to emotional changes within her, and in the power dynamic of their relationship. 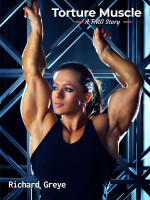 First things first: I thoroughly enjoyed reading Built: Making the Most Muscular Woman. This story was not without flaws, but it still managed to stand head and muscular shoulders above the majority of literature in what is loosely considered to be this particular genre.

I will try to avoid spoilers going forward, but be warned: there are some things that I will talk about that require at least a passing familiarity with the specific subject matter in order to make sense. Hopefully, the oblique references I make will be sufficient for someone considering a purchase to come to a favorable conclusion.

The story starts slowly and builds speed, with the protagonist first realizing his attraction to strong women, then by turns, realizing that he is particularly aroused by being submissive. A certain amount of the character’s psychology is addressed directly, and more is implied without ever being put into words. When, after several false starts, the character is in a position to actively pursue his dreams. The result of his windfall is, of course, the relationship that defines this story.

There are several important side characters in this story, but all of them pale in importance to the central figures, Drew and Lizzy. This brings me, in fact, to one of my few complaints: some of the minor figures need to have a greater role in order to make them feel more important. This is especially true for Lizzy’s daughter, Tiffany, who feels very much underdeveloped and really only comes into prominence as a source of conflict between Drew and Lizzy. One of the most important conflicts in the story and, arguably, the overall climax, feels a bit forced as a result of Tiffany’s under-developed role.

Despite these weaknesses, the story is still strong and holds together well. It also explores an issue that is rarely explored in this kind of adult fiction: why are dominant-submissive relationships so often portrayed as abusive? To an extent, this is because the author and the main character are both self-diagnosed cratolagniacs. It is difficult to explore the erotic effects of strength acts without resorting to violence and cruelty. Additionally, the backgrounds of the respective protagonists also contribute to this particular dynamic, because Drew has to struggle to get beyond his naturally competitive nature, while Lizzy has to work to find her own voice.

One thing Built particularly excels at is exploring how the roles of the characters evolve outside of the bedroom. Drew and Lizzy both change and mature as the book progresses, and not all the changes are physical; Drew, obviously, changes as he accepts his role as the submissive in their relationship; at the same time, Lizzy changes, as well, becoming more assertive and dominant, eventually demanding control over household decisions not by the strength of her body (although that would certainly be possible for her,) but by the strength of her will and personality.

The story follows Drew a man who loves muscular women. After his wife passes away he's given a mysterious serum which builds muscle beyond anyones wildest dreams. When he meets Lizzie a shy woman the two quickly begin a relationship. With Lizzie's past she seeks to get stronger and Drew helps her by facilitating her with the serum... and that is where the fun starts and man is the journey amazing.

Lizzie sets out not just with the goal to build muscle but to become the most muscular woman in the world. Dedicating herself to hours of grueling working out as Drew soon wonders as she becomes more and more dominent if he is truly living out his wildest fantasy ofr if he's created a monster.

The telling of this book is truly fantastic each chapter charting Lizzie's growth stands as its own set piece with the description level being some of best writing ive seen in these kind of stories. Drew and Lizzie strike up a deal, he will be the man outside the house, but she will be completely dominent in the bedroom. All of this leads to some amazing scenes as Lizzie comes into her own realizing she's fast becoming strong, strongest women alive and can easily over power Drew.

Another aspect I loved is how the story also approaches their life outside the bedroom as it tracks the day to day life of what it would be like living with a woman like this and being seen in public with her. In fact my two favorite chapters are where Lizzie attends a school play in a drop dead outfit becoming the talk of the night and when she accompanies Drew to his high school reunion and is confronted by a closet schmoe whom she soon teaches a lesson too.

To add to this the characters are fully formed and human and you really root for both of them to find happiness. Again this is truly a remarkable book and i give it my highest rating!

The fourth book by Richard Greye takes a different turn compared to the previous ones. The first person narration deepens, as he provides us a more detailed story with Built. It deals with a person, Andrew, who has trouble finding his equilibrium in life, through his choices or just plain bad luck.

He then reaches a point in his life where he can throw caution to the wind and give in to his most secret desires, muscular women. But not unlike fitness models mind you, VERY muscular ones. I mean big. Following all the events in his life, Andrew finds himself exploring and understanding his desires, with ups and downs along the way. This path forges him an opportunity to literally build the mate of his dreams.

The book offers a detailed insider view about the feelings of this man, going through his quest for a muscular woman. It is very well detailed and gives the impression to take the place of Andrew. It is a mix between very descriptive phase, about the events of his life and his action toward muscular women, but as well about the psychological aspect and the sometimes funny situations such men find themselves in.

But unlike many stories or book we read today, Built offers a detailed point of view from the woman’s perspective. Indeed, the author’s book is supported by his wife Jayne, who brings a balance of feelings and the real point of view from the muscular women perspective. Another theme of the novel is the shift in their relationship as her power grows.

The story explains the path taken by Andrew, the advantages and disadvantages he has to deal with along the way. From looking for a strong dominant lady, to wondering how dominating the lady of his dreams will become. Albeit lovingly, he gets to have not any muscular woman, but the most muscular on earth, along with a domination streak which surprises her as well.

Each chapter brings further character and plot development, with surprises along the way. If you like well-constructed stories with personable characters and strong women, I highly recommend this novel.