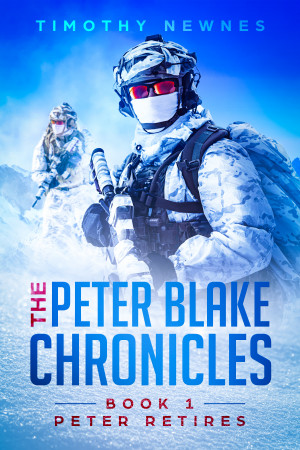 In this, book one we get a sense of who Peter is and what his abilities are as he joins his co-lead protagonist in future books ‘the unknown civilian woman’. The two are engaged with Special Forces in a race against time to stop a madman from setting a course that could end the lives of millions.
Download: epub mobi (Kindle) pdf more Online Reader
lrf pdb txt
Price: Free! USD
Add to Library
Create Widget
Tags: espionage action adult military man thriller adult action thiller spy action army veteran
About Timothy Newnes

I have served in the British Army in Bosnia, Cyprus, Canada, Northern Ireland, Africa, and Germany. As a child, I lived in Gibraltar, Germany, and the United Kingdom. I have had the privilege to travel to more than 70 countries. In my travels, I have visited Everest Base Camp, ran the Washington DC Marine Corp Marathon. I was in Germany at the end of the Cold War when the Berlin Wall was reduced to rubble, I was in Cyprus when border restrictions in Cyprus were relaxed by Denktas and Clerides and I was in Malaysia when 61 years of one-party rule came to an end.

At 52 Years old I am following my dream to become an accomplished author. Given that I have been writing procurement proposals to the Ministry of Defence and UK Space Agency for 13 years some might say I already have a penchant for fiction.

I received this book from a friend in exchange for an honest review. I enjoyed the book, it took me a few pages to get engrossed into the story but after I started I couldn't put it down. The plot is strong and characters are interesting.

I received this book for free in exchange for an honest review.

Not my usual genre but it was a welcome surprise at how easily I was able to connect with the main character, and how that connection quickly turned into support. I enjoyed the book greatly and look forward to future books.

A really good read. To the point, interesting and fantastic detail. A nice change from many of the the other books I’ve tried reading in this genre which I have found slightly predictable and riddled with cliches.
If this is Timothy’s first book then I’m sure any subsequent ones will not disappoint. Looking forward to reading them!

A great introduction to the series! Get a basic understanding of the characters and what motivated them in a setting of covert military missions. this was a fun and quick story with interesting characters. I think anyone in the mood for an interesting military based story would have a good time with this fast paced read.

I enjoyed this quick read which seems to be sort of introduction to the characters, especially Peter. There is a lot of backstory about his life and why he is the way he is. I enjoyed this and am looking forward to perhaps more of the story of Peter in a longer book. I hope so.

I loved this short action-packed read. It was fast-paced, explosive (literally) and flowed nicely from start to finish. The descriptive narratives were terrific and allowed you to easily see the scenes in front of you. I really like the characters and hope that Captain Sam will be joining Peter Blake on his missions.

I hope the next in the series is released soon!

You have subscribed to alerts for Timothy Newnes.

You have been added to Timothy Newnes's favorite list.

You can also sign-up to receive email notifications whenever Timothy Newnes releases a new book.