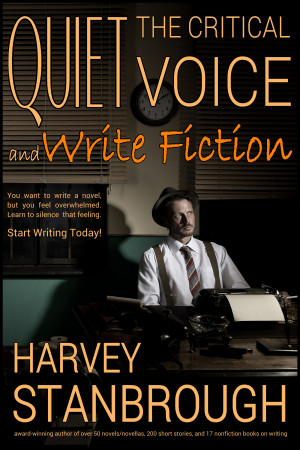 But you can silence that feeling and start writing your novel TODAY.

Your critical mind is fear-based. It exists to protect you. It keeps you from putting your hand on a hot stove or from crossing the street without checking for oncoming traffic.

In the case of putting yourself "out there" in the form of short stories or novels, it strives to protect you from yourself.

It strives to protect you from rejection by editors and publishers, or from the possible embarrassment you might feel from a bad review.

Yet this fear is baseless. If you write fiction, your work will occasionally get a bad review. It will also get many good ones. It's all a matter of the reader's personal taste.

If your work is rejected by an editor, what happens? Nothing. You send that piece back out to another editor and you write the next story. Because you're a writer. It's what you do.

Quiet the Critical Voice (and Write Fiction) will show you in detail how to recognize the critical voice and how to silence it so you can get on with your life's work.

The book contains a section on Heinlein's Rules and a revolutionary, freeing technique called Writing Into the Dark.

As a bonus, writing will become the most fun you've ever had.

Harvey Stanbrough is an award-winning writer and poet. He’s fond of saying he was born in New Mexico, seasoned in Texas, and baked in Arizona. After 21 years in the US Marine Corps, he managed to sneak up on a BA degree at Eastern New Mexico University in Portales in 1996. Because he is unable to do otherwise, he splits his writing personality among four personas: Gervasio Arrancado writes magic realism; Nicolas Z “Nick” Porter writes spare, descriptive, Hemingway-style fiction; and Eric Stringer writes the fiction of an unapologetic neurotic. Harvey writes whatever they leave to him. You can see their full bios at HEStanbrough.com.

You have subscribed to alerts for Harvey Stanbrough.

You have been added to Harvey Stanbrough's favorite list.

You can also sign-up to receive email notifications whenever Harvey Stanbrough releases a new book.