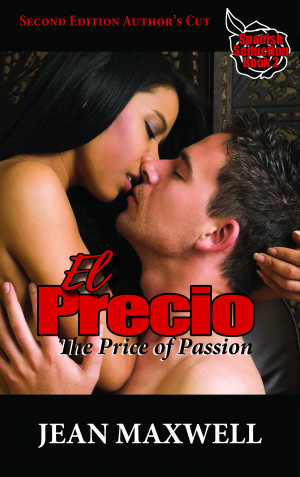 El Precio: The Price of Passion

Following your passions, whether in your past, present, or future, comes at a price. With her career and her heart both at stake, will architect Zara Flynn let the past jeopardize her future with the man she loves and the legacy she's fought so hard to protect? More
Happily in love with engineer David Parker, and pursuing her new career as CEO of Flynn Enterprises in sunny Spain, architect Zara Flynn’s idyllic world is shaken to the core with a single text message. She must return home to Montreal to deal with an apartment break-in and the theft of her car. At the same time, her heart is put on the line by a woman from Dave’s past who claims to be pregnant with his child.
Her mind reeling, she flees to Montreal to do damage control on her property, landing in the arms of an old flame who spares no expense in trying to win her back. Exhausted and vulnerable, she is charmed by his attention, but can he be trusted?
Zara is torn between two worlds, when the most devastating news of all is revealed. Can she make things right with Dave, or has she already lost him to another woman?
Available ebook formats: epub mobi pdf lrf pdb txt html
First 20% Sample: epub mobi (Kindle) lrf more Online Reader
pdb
Price: $4.99 USD
Buy Add to Library Give as a Gift
How gifting works
Create Widget
Tags: romantic suspense interracial romance montreal engineering contemporary romance tenerife family legacy architect hero spain holiday
About Jean Maxwell

Jean Maxwell was born in Edmonton, Alberta, Canada at the tail-end of the baby boomer era, which she says makes her a "late-boomer". It's a lot like her writing, which she didn't start until many decades later. But Jean was always an artist at heart, having practically come out of the womb with pencil in hand and blessed with (as the fictional John Hammond put it) a 'deplorable excess' of creativity. A graphic designer as well as a musician, the muses clearly have had their way with her and aren't done yet. To date, she has 5 published novels to her credit and more than a dozen ghostwritten works. To keep a pulse on the public's literary tastes, she also reviews books for a popular romance review website. She still resides in her home town and enjoys things 'the Canadian way', which means having the outdoors as a best friend, apologizing for no real reason, bemoaning an overtaxed and over-governed society but remaining blissfully unconcerned about politics, religion or gender issues. We think it's the weed.... :)

El Precio by Jean Maxwell; Spanish Seduction Book 2
Is starting a new life in a foreign country sustainable? When the voices of home are calling, you must answer with your heart.

About the Series: Spanish Seduction

A multi-generational saga of passion, vision, and the legacies of a family business operating in every continent on the globe. Engineer Tristan Flynn sets the story in motion when he meets and marries young Marlena Sanchez while travelling through Spain as a backpacking undergrad, eventually establishing Flynn Enterprises, a multi-billion dollar engineering firm. The series follows the lives and loves of their offspring, business colleagues and descendants, each of whom bring their own passions to the Flynn dynasty, criss-crossing oceans, continents and racial boundaries.

Reviews of El Precio: The Price of Passion by Jean Maxwell

You have subscribed to alerts for Jean Maxwell.

You have been added to Jean Maxwell's favorite list.

You can also sign-up to receive email notifications whenever Jean Maxwell releases a new book.