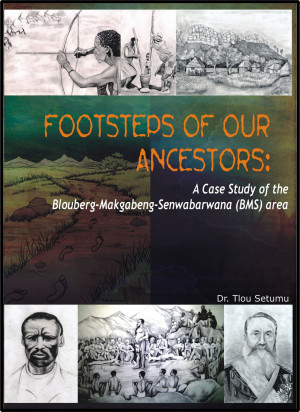 Footsteps of Our Ancestors

By Tlou Setumu
This book uses the Blouberg-Makgabeng-Senwabarwana (BMS) area as reference point to trace South Africa’s past from its indigenous communities, the San, the Khoikhoi and the Bantu-speaking people. Later in the area came the early European travelers, traders, hunters and explorers – then came the missionaries, followed by the Boer and British colonial settlers. More
This book is an overview of South Africa’s past stories, using the Blouberg-Makgabeng-Senwabarwana (BMS) area as reference point. The mighty Limpopo River and its beautiful, lush valleys and the salty Soutpansberg; the majestic Blouberg Mountains; and the historic Makgabeng plateau – all these landmarks were once inhabited by representatives and forebears of almost all South Africa’s population groups: the San, the Khoikhoi, Bantu-speaking communities, European travelers, traders, explorers, missionaries, as well as the colonial settlers: the Boers and the British. The BMS area is therefore a microcosm of South Africa’s history as it was in various stages inhabited by different groups. Therefore, this work traces South Africa’s past using the BMS area as a focal point.

Tlou Setumu was born, grew up and went to school in the rural, impoverished Makgabeng area in the north-western part of Limpopo Province, South Africa. He started Sub-A at Noko-Tlou lower primary in 1972, and proceeded to Mogohlong higher primary, then matriculated in 1983 at GH Franz high school.
Owing to his poor family background (he was raised by a single, sickly mother), he did not have funds to continue with higher education studies. He became private teacher and was self-taught as he studied privately until obtaining BA degree in 1993 with University of South Africa (UNISA).
In 1994 he enrolled and completed Higher Education Diploma at the University of the North (current University of Limpopo). He obtained BA Honours at UNISA in 1998, and in 2001 completed MA degree at the University of Pretoria. He enrolled for PhD degree in History at Rand Afrikaanse Universiteit (currently University of Johannesburg), but later moved the programme to the University of Limpopo, where the programme was completed in 2010.
He had started as a volunteer for the South African Heritage Resources Agency (SAHRA), and then worked as researcher from 2001. He established Limpopo Heritage Resources Authority (LIHRA) in 2004 while employed in the Limpopo Department of Sport, Arts and Culture. He later worked at the Robben Island museum as Head of the Department of Public Heritage Education. He is currently heritage practitioner in Limpopo Province, specialising mainly on the Blouberg-Makgabeng-Senwabarwana (BMS) area. (www.mak-herp.co.za). 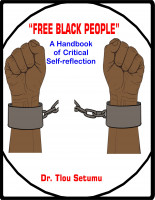 You have subscribed to alerts for Tlou Setumu.

You have been added to Tlou Setumu's favorite list.

You can also sign-up to receive email notifications whenever Tlou Setumu releases a new book.