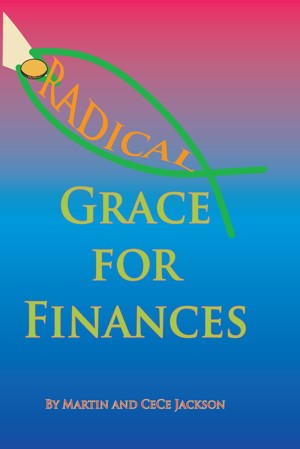 By Martin Jackson
& Cecelia Jackson
If all the Christian financial advice you've been getting doesn't work for you, or seems too much like the world's system, think about Jesus' advice in Matthew 6:33-34. The writers did! Read their testimony of how it worked out!. Take home lessons follow each chapter. More
Are you feeling convicted of double mindedness in your Christian life? You give to the church, even tithe, but you're anxious about food, drink, clothing and shelter. You know Jesus Christ is asking you to let go of the anxiety. How? Martin and CeCe Jackson tell you how their experiment with radical trust and shrinking anxiety works for them in Radical Grace for Finances.
To follow your own version of their path takes setting aside a lot of worldly common sense, which is not God's wisdom. Each chapter ends with a take-home lesson you can pray about applying to your own life. Even if what Martin and CeCe suggest is too radical for you, this is a good Christian adventure story.
God is not a vending machine, operated by just the right prayers and faith. His answers are tempered by His wisdom, love and foreknowledge. So if you decide on a radical journey of financial faith, expect adventures and moments of panic soothed by the words of Jesus. Martin and CeCe write of their adventures in dialog form, alternating their voices. Some of the events are great fun, now that they're in the rear view mirror of memory, but they offered plenty of chances for anxiety at the time.
Chapter 31 invites you to enjoy unexpected answers. Chapter 32 asks you to cast aside the distrust taught by the world.

Martin and Cecelia Jackson have been married well over 50 years. They split the duties in publishing books and magazines. CeCe, the short form of her name, is chief editor. Martin is titled publisher, which gives him responsibility for anything someone else doesn't get done in the organization.
CeCe is an Oregon native. She grew up in the Portland region. Her father, an engineer and model airplane engine manufacturer, moved the family to Santa Monica, California just before CeCe started studies at Pmona College in Claremont, CA.
Martin is an Arizona native, born in Jerome. His father was a National Park Service area administrator and the family lived at national monuments until Martin enrolled at Pomona College. There the couple met. They married after Martin was working as news editor of the Arroyo Grande, CA, Herald Recorder. Following military service he worked at several California and Arizona newspapers. The couple relocated to Pinetop-Lakeside Arizona after he resigned a news editor position in Hemet, CA. Martin launched a new careers as a school bus driver, electrician, computer and telephone technician and rescue emergency medical technician. Approaching retirement, the couple formed Four Craftsmen Publishing.

You have subscribed to alerts for Martin Jackson.

You have been added to Martin Jackson's favorite list.

You can also sign-up to receive email notifications whenever Martin Jackson releases a new book.