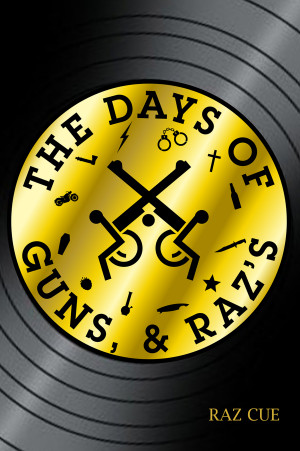 By Raz Cue
"A rollicking account of a paralyzed Gen Xer coming of age in the oft-times sordid Hollywood rock scene of the mid '80s, "The Days of Guns, And Raz's" is a treasure trove of little-known anecdotes from the formative days of Guns N' Roses, LA Guns and other Hollywood hard-rock and heavy metal luminaries. Related in a wry, cynical voice, Raz Cue's memorable memoir is ESSENTIAL reading." More
A little ol’ band called Guns N’ Roses formed in Raz Cue’s living room. And thus, Cue became the band’s first manager... to be fired. With absolutely no hard feelings, Mr. Cue remained a trusted member of G N’ R’s inner circle for the remainder of the decade, allowing him to witness the iconic band tour the world’s stages as they rose to the pinnacle of rock ‘n’ roll. When the Guns N’ Roses party quit being fun for him, Cue stepped away from the swelling ranks of backstage hangers-on so that he might fully enjoy the band’s incendiary performances from a fan-in-the-audience perspective.

With good times and fun stories constantly swirling about in his mind’s eye, a few years back, Mr. Cue resolved to set the standard for which all future memoirs should be judged. Four hundred and twenty drafts later, the product of that quest emerged: The Days of Guns, and Raz’s. Far more than a Hollywood rock ‘n’ roll memoir, the book follows Cue’s drug-addled journey from feral child to moral-ish adult. His spinal injury during high school and lifetime of riding a wheelchair, while higher than the International Space Station, are thrown in to keep it all rolling along.

Mr. Cue manages to wrap up the whole shebang neatly within the changing landscapes of 1970s through 90s America, all the while showcasing his lifelong love of music and cheap thrills. With an undying admiration for hungry up-and-coming artists, Cue remained involved in the Los Angeles music scene through the mid-90s implosion of the Sunset Strip, so he wedges in a bit of name-dropping from that period, too. If you’ve longed for a caustic, satirical, blue-collar rock bio that delivers a stinging bitch slap to our current insanity-level political correctness, this one’s for you!
Download: epub mobi (Kindle) pdf more Online Reader
lrf pdb txt
Price: Free! USD
Add to Library
Create Widget
Tags: free ebook ebook quadriplegic free download free kindle free ebooks free e book gnr quadriplegia raz cue
About Raz Cue

During a freak late-summer snowstorm, under a pile of greasy newspapers at the back of a dilapidated tobacco shack, Raz Cue entered the world to absolutely no fanfare. He was the seventh son born to a merchant-marine-turned-sharecropper father and a slightly intoxicated, pill-popping she-wolf. Cue discovered his writer’s voice at an early age when he took pen to paper and left the note “Leave me alone!” pinned to his crib. Cue quickly regretted the request… right around suppertime. He then resolved to only use his gift of prose for good – and breastfeeding requests. Weaned off she-wolf teat by the age of twenty-one, Cue replaced wholesome mother’s milk with Red Bull, vodka, and strippers. The new lifestyle led to his writing several almost-published poems and scores of highly regarded short stories. In reality, those short stories were merely unfinished long stories, but his cohorts were too high to notice. In search of truth, Cue relocated to Southern California, where he began crafting complex storylines for adult films. That same year, Cue won a coveted AAVN award in the category “Most Believable Plot Not Involving a Plumber.” With complex stories in short demand, Cue was forced to supplement his meager income by selling herbal remedies to major movie studio executives, A-list actors, and – unfortunately – an undercover cop.
After brief incarceration and much soul-searching, Raz Cue began writing in earnest. He wrote to his probation officer and the judge who showed leniency; he wrote letters to editors about alien technology buried under the Antarctic ice, and he wrote pleas for expositions of secret Grand Canyon gold mines. He also wrote a novel, Radio Snack. An editor suggested the work was a perfect example of “how not to write a novel.” Deaf in one ear and oblivious to negativity, Cue set about penning his next opus. As 2010 came to an end, hard work, determination, and insomnia paid off when Stoneweed Press released Cue’s new novel, Bud’s Love Bus. The following spring, Stoneweed’s publicity department sent him on the road to work the weed circuit in search of stoners who read, then charm those unicorns into spending twenty bucks on a book – not a dub. Instead of promoting the novel as his publisher wished, Cue spent 24/7 toking, then set forth on a quest to discover which is the most delicious type of pie. Despite many sidetracks and setbacks, by 2015, Cue had sold nearly thirty books and narrowed it down to a tie between pecan, cherry, and fresh strawberry.

You have subscribed to alerts for Raz Cue.

You have been added to Raz Cue's favorite list.

You can also sign-up to receive email notifications whenever Raz Cue releases a new book.