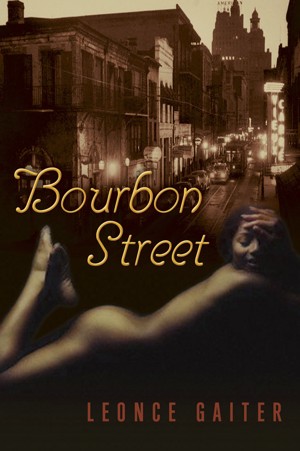 During Mardi Gras in 1958 New Orleans Alex Moreau wants release from brutal world of hatreds and violence to which he was born.

So Alex invites Texas gambler Deke Watley to a high stakes Mardi Gras poker game. Only Deke doesn't know that time is running out and old debts must be paid before Alex gets what he wants and lets Deke—or any other hustler—leave Bourbon Street alive.

Raised in New Orleans, Washington D.C., Germany, Missouri, Maryland and elsewhere, Leonce Gaiter is the quintessential army brat—rootless, restive, and disagreeable. He began writing in grade school and continued the habit through his graduation from Harvard. He moved to Los Angeles and put his disagreeability to work in the creative and business ends of the film and music industries. His nonfiction writing has appeared in The New York Times, The New York Times Magazine, The Los Angeles Times, The Washington Times, LA Weekly, NY Newsday, The Washington Post, Salon, and in national syndication. His thriller "Bourbon Street" was published by Carroll & Graf. He currently lives in Northern California.

You have subscribed to alerts for Leonce Gaiter.

You have been added to Leonce Gaiter's favorite list.

You can also sign-up to receive email notifications whenever Leonce Gaiter releases a new book.