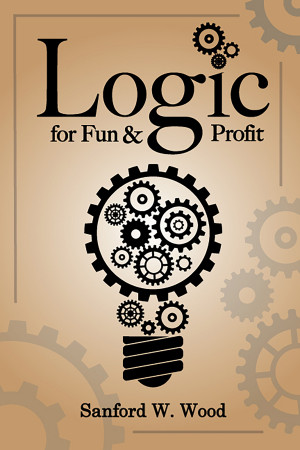 Logic for Fun and Profit

By Sanford Wood
Stretch your mind and hone your logic with these brain-bending word problems More
This book is intended to be used for an introductory course in logic that includes both traditional and contemporary approaches to the study of logic. Throughout the book, humorous examples of logical errors are used in a style that is both light-hearted and witty to keep students actively engaged in the exercises. Also, the subject matter is presented in such a way that it is attractive to those who have a personal interest in pursuing the mental challenges of logic on their own.

The exercises begin with a warm-up of “mental calisthenics”, proceeding to humorous examples of misuse of language, and gradually moving to mathematical and computer logic as each chapter builds upon the lessons of the preceding one. Each chapter contains sample exercises with solutions, followed by additional exercises that can be worked in class or assigned for students to work on their own. Where rigor is required, clarity of exposition is supplemented with detailed examples. The Appendix contains solutions to odd-numbered exercises. The solutions provide not only the answers but explanations of how the answers are derived so that students can understand the methods they should use to reach their logical conclusion.
Available ebook formats: epub mobi pdf lrf pdb txt html
First 10% Sample: mobi (Kindle) lrf pdb Online Reader
Price: $5.99 USD
Buy Add to Library Give as a Gift
How gifting works
Create Widget
Tags: mathematics math book word puzzles math puzzles math games math ebook hard puzzles logic problems logic puzzles math education
About Sanford Wood

Sanford W. Wood received his Ph.D. in philosophy from Vanderbilt at the age of 29. Some years later he returned to graduate school for post-doctoral studies in computer science and artificial intelligence. During his 40-year teaching career, his preferred subject of instruction was logic.

Near the end of his career, Dr. Wood began organizing his cumulative knowledge to create a logic textbook that would be both challenging and engaging for students, going beyond the often dry applications most commonly found in other texts. But his wife’s failing health forced him to put his work on hold for several years. After her death, Dr. Wood was able to return to his endeavor, completing it in 2019.

He now lives alone with his two cats and pursues his hobbies – gardening and cooking. He maintains a large vegetable garden with a small orchard, and uses the produce he grows to make jams, pickles, and sweetbreads to give to friends and family and sell at the local farmers’ market. He is still active in church and civic affairs, where he often accepted positions of responsibility in years past. However, as he approaches 80, Dr. Wood has decided to take a more passive role and pass the baton on to the younger generation, preferring now to spend his time in quiet contemplation with his cats and his garden.

You have subscribed to alerts for Sanford Wood.

You have been added to Sanford Wood's favorite list.

You can also sign-up to receive email notifications whenever Sanford Wood releases a new book.