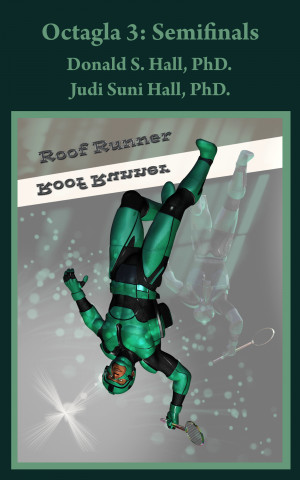 By Donald S. Hall
& Judi Suni Hall
Getting into the semifinals had a high cost of injuries and suspensions for defending champion Tamara. Can the team and new players regroup, and is that enough? The Pendrae Suns have Menzaille, the only Galactic Octagla goalie with shutouts and he’s hot. But Coach Isley has a surprise for him, one that could reshape Octagla - reintroducing roof runners. More
Did his coach feel the same way the year the second string line Isley was on became first string, created a little magic, and ended up in the Hall of Fame? That thought cheered him as he tried to rearrange his lineup to cover for the injuries and suspensions that were the cost of getting to the semifinals. Of the three players shipped to Gingezel for treatment, Chan, the hero that got them into the series would recover. Superstar center, Daron, with head injuries would not. And winger Ranga with his shattered hand was somehow seriously mixed up in drugs along with his drug lord father. What a PR mess.

Isley forced himself to put that aside. He had hard decisions to make. Tedia had to go. He had almost cost them getting into the series. That left him with no replacement for Ranga again. At least with Gengo arriving Red could move to first string and replace Daron. Isley made a face. Gengo. Son of the great Li. Why wouldn’t he play at his potential. Even without trying he was better than Red but he had refused first string. He was worse than Larr, who tried too hard to make up for being superstar Rall’s son.

But maybe, just maybe Larr could help the team out now. He’d shown he could roof run like his father. If he could do it consistently, that might give them the edge they needed. Roof runners had been out of style for over a decade so Menzaille would not know how to play against one. Menzaille was the worst problem they were up against - the only Galactic level Octagla goalkeeper to have a shutout to his credit, and he had several.
Download: epub mobi (Kindle) pdf more Online Reader
lrf
Price: Free! USD
Add to Library
Create Widget
Tags: scifi scifi series donald s hall judi suni hall gingezel octagla space sport weightless sport fiction about sports scientist scifi
About Donald S. Hall

Donald S Hall, PhD. and co-author Judi Suni Hall, PhD. have shared their lives and careers since marrying as undergrads.They both did PhDs in theoretical physics, then moved into industry and worked at AECL, Canada’s nuclear research lab.

Judi’s PhD. is in theoretical nuclear physics, the kind of modeling used to do stellar interiors. Judi started her career designing safety systems for Candu reactors. She shifted to industrial risk analysis, ending up Technical Manager of AECL’s RARE (Risk and Reliability Evaluation) Consultancy. In that capacity she worked with a number of industries, including the Canadian Space Agency at the time when the Canadian involvement in International Space Station was first being defined. That lead to the permanent love of the idea of humanity spreading into space.

En-route to represent Canada at a NASA conference Judi caught a severe virus that changed both of their lives. She shared the infection and the next 10 years were a write off as they struggled to rebuild their lives.

Don now runs Apps & More Software Design. It has recently expanded into psychiatric testing on the iPad and iPhone in collaboration with a Johns Hopkins trained psychiatrist.

In his youth Don played Junior A hockey, winning MVP for his team in their 1969 playoff run to the national semi-finals, and was invited to the Los Angeles Kings training camp. At graduate school he played goal for one year for the varsity team. He was also an avid box lacrosse player, playing goal at both the Junior and Senior levels. His love of both games and physics background naturally lead to the idea of inventing a similar game played on space stations in a weightless environment and in three dimensions.

Octagla is a rough, fast-paced zero gravity hockey-lacrosse hybrid. It is played in a transparent eight sided court located at the center of an orbiting space station. This series follows the Tamara Octagla team in their quest for a three-peat of the Galactic Octagla Championship.

You have subscribed to alerts for Donald S. Hall.

You have been added to Donald S. Hall's favorite list.

You can also sign-up to receive email notifications whenever Donald S. Hall releases a new book.