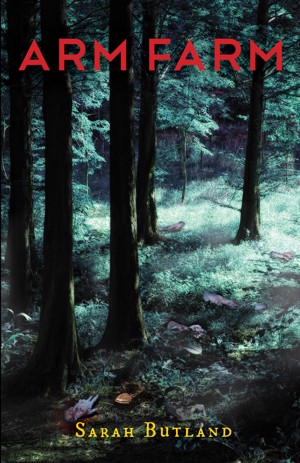 By Sarah Butland
Rated 3.67/5 based on 3 reviews
Natalie walks through the field of forensics with the intent of discovering who did her parents wrong. Natalie is on her way to becoming a success but finds herself dwelling on her past. Will she overcome what has been happening to be able to let go of it? It's a long road for this young girl but she chose the path the Arm Farm. More
“The last memory I had of them was filled with spilled blood and vacant eyes, the smell of baking, then burning. Cookies and blood.”

What would you do if you came home to the aroma of chocolate chip cookies and the sight of your mother's blood pooled on the kitchen floor?

Would you make a promise to your seven-year-old self to find the killer?

In the novel Arm Farm, university student Natalie Hartman finds herself trying to convince others that her parents' case is more of a priority than her own safety. The forensic science student flies across the nation looking for answers. And so does her stalker.

Arm Farm takes Natalie on a journey of self-discovery to find out not only who she wants to be but who she is. Her life may seem simple to unassuming classmates, but to those close to her, it becomes a terror with twists and turns they never want to experience. Will Natalie find out who killed her mother and father before her own life is taken?

Arm Farm is a novel of 59015 which offers its young adult readers a glimpse into the human reality of forensic science. Natalie's story is more about people and a murder investigation than it is about the unrealistic portrayal of Hollywood science.

The suspense of Arm Farm compares to those written by highly acclaimed author Harlan Coben but without adult complexities a young adult reader may not enjoy.

“And as I walked back through the valley of the shadow of arms, I quickened my pace, dried my tears and prayed quietly.”

Sarah Butland was born in Ontario, the year was 1982. She was moved to New Brunswick for over 15 years and now resides at home in Nova Scotia, Canada. Butland has been married to her high school sweetheart and has a superstar son named William. Besides home schooling and working part time, Sarah finds time to follow her dream of being an author and teaching others that they can do the same.

Butland started creating while still learning to walk and in years to follow was able to put a writing utensil to paper to document her creations before they were completely lost. Of course, her first manuscripts were in dire need of editing but she didn’t seem to mind nor did her readers.

The first “big break” for Butland came when she was still a teenager feeling like she was unlike every other teenager she knew. She heard from a poetry contest that her poem “Wrong Shell” would be published in their anthology; would she kindly send them thousands of dollars to continue on in the finals. Butland’s parents refused. So began the struggle of discovering which awards were actually earned not bought.

Limiting herself to contest submissions from then on, Sarah Butland realized her career of writing would be a difficult struggle no matter the talent she held inside or was forced out. Many stories, attempts at novels and thousands of ideas later, Butland created BananaBoy and the Adventures of Sammy was born with Sending You Sammy, her first published children’s book. Then came Brain Tales – Volume One, a collection of short stories Arm Farm, her current literary pride and joy and Blood Day - the Short Story and the Novella.

Butland’s next accomplishment planned to be winning the Amazon Breakthrough Novel Award which would then be mentioned among her most joyous literary accomplishments. Unfortunately she didn’t win the 2011 award but is now working on new and greater things.

Sarah Butland’s Arm Farm starts wonderfully with a young woman walking into a field of… arms. The touches of horror blend perfectly with reality as she contemplates why she’s there—a perfectly natural explanation—and the chapter’s intriguing, disturbing and fascinating all at once.

The story becomes a little more mundane as the top-of-her-class college student proceeds to get thoroughly drunk while celebrating success with her teacher. Characters make important decisions with surprising ease, belying the complex emotions of the first chapter and tending more towards a cozy mystery style of writing. A mystery in the past concerning the murder of the protagonist’s family, bleeds into the present with a stalker whose thoughts are occasionally revealed. Red herrings are tossed into the mix then disappear, while odd remarks gradually become clear, giving a feeling that the characters have kept secrets from the author as well as the reader while the story progressed. The result is a slightly awkward cross between mystery and suspense. A few soaring scenes will stick in my mind despite occasional typos and unconvincing behavior. Meanwhile the Arm Farm of the title creates a well-written powerfully haunting wrapper to the tale.

Disclosure: I received a free ecopy of this novel from the author in exchange for my honest review

After walking in from school to find her mothers lifeless body covered in blood and then being told her father had also been butchered in their family home, seven year old Natalie’s life is set on a new course. She grows up with an interest in forensic science, not consciously with the aim of solving her parents still open murder, but more so she could help other victims and their families by getting answers. Natalie’s natural skills were noticed by her professors and she was given the opportunity to attend an out of state forensic conference, this made headlines and soon after Natalie found herself as the victim of a stalker.

I wasn’t very impressed with the cover art for this book. It wasn’t eye catching, the colours are pale and the cartoon like drawing coupled with the strange title are quite misleading. I think to get this book noticed on the market it definitely needs a new front cover, one that will make it stand out from the crowd because when choosing a book buyers are initially attracted by the front cover.

The story is quite intriguing, I like the idea of it and think with quite a bit of work this could be a very good book. Punctuation and grammar are not an issue, there was nothing in those areas that jumped out at me as being a problem but the overall writing needs to be addressed.

1) The dialogue is contrived and not very realistic:- There is quite a lot of dialogue in this book but none of it sounds natural, conversations aren’t written in a way that you could ‘hear’ the people saying them, it was as if the characters were reading from a script and they were very poor actors.

2) The sentences were stilted:- There was no flow to the writing, it became frustrating to read because it was so unnatural and wooden. Some sentences were so stuffy and structured in such an odd way that I felt like I was reading something written in the 1800’s!

3) Vocabulary :- We are treated to some ‘big’ words i.e. smorgasbord for one (surely ‘varied buffet’ would have sufficed) yet the author made the very common error of writing ‘blood splatter analysis’ instead of ‘blood spatter analysis’ (which is one of my pet hate mistakes) yet it wasn’t picked up by her pre-published readers or ‘editor?’

I don’t want it to seem as if I am really down on this book because as I said earlier I found the idea very interesting, this is where a good editor comes in. As well correcting grammatical errors an editor picks out unrealistic areas of the plot and can reconstruct sentences to aid readability. A good edit and a new front cover would dramatically improve this books saleability and I think it is something the author should seriously consider.

(reviewed 22 days after purchase)
Maranda Russell reviewed on on Nov. 3, 2011

Even though this book is not the normal genre I read, I really found myself drawn to the story and enjoying it. The writing is excellent and the story is full of suspense and emotion that keep you reading and hoping for closure for our young heroine. I found the forensic science parts of the story both believable and fascinating, even if I don't know a whole lot about that field myself. The author was able to make complex scientific information accessible even to those of us unfamiliar with the concepts. Definitely a worthwhile read!

You have subscribed to alerts for Sarah Butland.

You have been added to Sarah Butland's favorite list.

You can also sign-up to receive email notifications whenever Sarah Butland releases a new book.