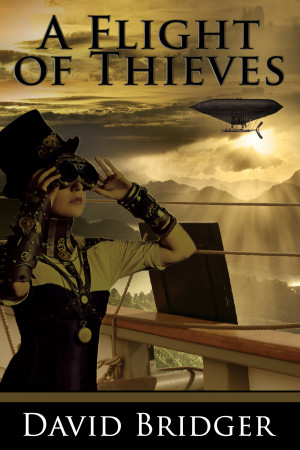 A Flight of Thieves

Victoria has spent all of her sixteen years in a secluded palace on Ben Nevis Island under the protection of King Henry, one of the three original robots programmed by the ancient ancestors to rule the flooded planet Earth. She’s safe there, but her family and their intelligent clockwork servants treat her like the tomboy child she used to be—and sometimes still is. She yearns to fly away in one of the great steam-driven iron airships to see the world.

It seems too good to be true when Henry asks Victoria to board the Royal Airship Elizabeth, with him disguised as her robot footman, and fly over the sea to meet the Lord of Ireland. Victoria jumps at the chance for an adventure, and they take to the skies together.

But the world is a dangerous place. Air pirates prowl trade routes, and slaver fleets cross the oceans to raid unprotected islands. The Royal Navy is building up to a war, and Henry’s old friend, the Lord of Ireland, is accused of giving safe harbor to pirates. Victoria and Henry must overcome them all in order to make their way home to a kingdom that might not still be standing.
Available ebook formats: epub
Price: $4.99 USD
Buy Add to Library Give as a Gift
How gifting works
Create Widget
Tags: coming of age artificial intelligence pirates robots airship naval battles flooded planet
About David Bridger

David Bridger settled with his family and their two monstrous hounds in England's West Country after twenty years of ocean-based fun, during which he worked at various times as a lifeguard, a sailor, an intelligence gatherer, and an investigator.

Reviews of A Flight of Thieves by David Bridger

You have subscribed to Smashwords Alerts new release notifications for David Bridger.

You have been added to David Bridger's favorite list.

You can also sign-up to receive email notifications whenever David Bridger releases a new book.