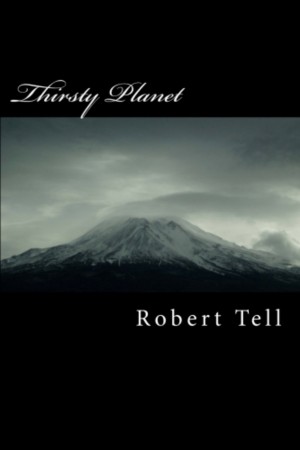 By Robert Tell
In 2121 Moss Leder flees across Canada one heart-pounding step ahead of his enemies. Earth is in trouble. People kill for drinking water. Leder's innovative time booth holds the key to the planet's renewal. His enemies fear his scheme will destroy their black market water cartel and try to stop him. An epic battle in the ancient tunnel under the Detroit River determines his destiny, and Earth's. More
In 2121 Dr. Moss Leder flees across Canada one-heart pounding step ahead of his ruthless enemies. Climate change is destroying civilization. Primitive bands of dehumanized squatters roam the Earth and kill for scarce drinking water.

Leder's innovative time booth holds the key to the planet's renewal. Leder's nemesis, R. Faro Bradshaw, and his greedy political cronies are exposed. They control the black market in fresh water. Fearing Leder's scheme will destroy their business model, they try to stop him. Leder and his private army of religious Sectaries go head to toe with Bradshaw's thugs.

At first, Leder's beautiful assistant, Zoe Reuel, is directed by Bradshaw, who is also her lover, to undermine Leder's plan. Can she throw off Bradshaw's influence and become one of Leder's advocates, and his lover…or is Bradshaw's hold on her too strong?

Open warfare erupts between those who control the water resources and those who don't, with Leder emerging as the charismatic leader of the Sectaries, a militant religious movement with a mission to heal the planet. Is this the last chance for the Earth?

An epic battle is fought in the ancient car tunnel under the Detroit River. Leder is wounded but escapes with Zoe Reuel. Destiny calls to them from 2022. Will they defeat their enemies in time or be forced to surrender?

A century earlier, in 2022, Cassie Lopez, is a passionate environmental specialist in the Administration of President Samantha Blackwell. She has uncovered startling evidence linking the corrupt Senator Alphonse Grimsby to the murder of several environmental activists.

When Cassie tries to make this information public, powerful forces are unleashed that threaten to destroy her and her husband, Paul.

When our 22nd century physicist and our 21st century politician team up to try to fix things, all hell breaks loose. The paradox of time travel brings both stories and love affairs together with a satisfying resolution in the year 2104.

And for people who like literary puzzles there is a wonderful "Old Testament" allegory, with biblical clues to be found in some of the key character's names.

Robert Tell was born in Brooklyn, New York, and educated at Columbia University. He now lives in Farmington Hills, Michigan, and winters in Boynton Beach, Florida. Tell is grateful that his parents didn't name him William Tell. He last saw snow in 2004. His award winning fiction, poetry, columns, articles, and creative non-fiction have appeared in many periodicals. He has a growing catalogue of published books including works of fiction, memoir and poetry. "The Witch of Maple Park (Harry Grouch Mystery Series #1)" is an Eric Hoffer Book Award Grand Prize Finalist, and First Runner-Up in their Ebook Fiction category. It is compelling fiction inspired by a true story. "Nanobe (Harry Grouch Mystery Series #2)" is a hospital based medical thriller based on Tell's years as a hospital CEO and Public Health executive. "Stradella's Revenge (Harry Grouch Mystery Series #3)" retells the legend of Italian composer Alessandro Stradella's 17th Century assassination from the point of view of a modern murder mystery. In "Deep Pockets (Harry Grouch Mystery Series #4)," Detective Grouch busts up an international Mafia controlled scam bilking millions of dollars through fraudulent medical malpractice lawsuits. "Thirsty Planet" was a finalist for the prestigious Montaigne Medal award for thought provoking writing. It was recently translated and released in China by a Chinese publisher. "Dementia Diary, A Caregivers Journal" uses compassion and humor in a memoir about caring for a loved one with dementia.

Reviews of Thirsty Planet, A Novel by Robert Tell

You have subscribed to alerts for Robert Tell.

You have been added to Robert Tell's favorite list.

You can also sign-up to receive email notifications whenever Robert Tell releases a new book.