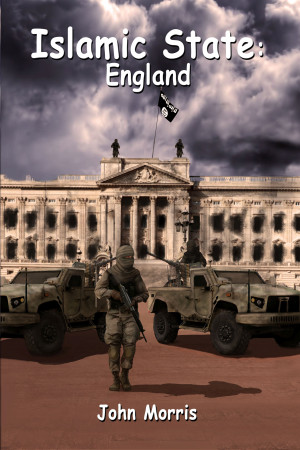 By John Morris
Islamic State: England is an action, mystery and espionage thriller set in contemporary times. The plot unravels like a who-done-it, with MI6 playing catch-up with the intentions of ISIL, and their planned Caliphate of England. Supported by a romance between the main characters, this fast-paced ripping yarn is crammed with intrigue and a joy to read. More
When a top undercover agent working in Syria on Friday, turns up dead in Norfolk on Monday, Dan Glover of MI6 goes to investigate. He discovers ISIL are landing passenger jets at an unregistered British airfield. Their cargo includes militia, weapons, and civilians: 2,000 illegal immigrants per day. Then he discovers four more airfields.
Making discovery after discovery, Dan concludes ISIL are planning to turn England into a Caliphate. A small team from MI6, and local police assists Dan. The local Station Officer, Inspector Felicity Wigglesworth becomes his staunchest supporter. They become lovers, but can their relationship withstand the rigorous call of duty?
Their romance seems destined to fail, as Muslims take over towns and villages, altering the ethnic, but not the political make-up of councils. O)nce in majority, should they cross the floor, war with ISIL on British soil, becomes inevitable.
Interspersed with romantic interludes, Islamic State: England, details how religious fanatics could take over England, and Europe.
The plot twists and turns, as greater discoveries are made. Those in positions of power refuse to take pre-emptive action, by which time it is too late. With SCUD missiles headed for central London, can Dan muster the resources to fight back against the tyranny of ISIL?
One irony of this book is that aspects of it are already coming true in real life.

John Morris has stories to tell. His novels are absorbing fiction, which are intense and emotional at times, and funny at others. “I study the Human Species,” he relates. “I share this by writing a rainbow of human emotions. One minute the evocative words may make one cry, and the next, humour dispels the emotional miasma. Good novels, like real life, are a question of balance, and drawing the reader in.”

Morris draws on his eclectic life experiences in his writing. He brings to the reader a range of heartfelt emotions, highs and lows of human life, as mirrored by humanity in general.

“I am sharing my written words with readers, and feedback has been fantastic. I’m hungry to write more, and share with others life’s experiences. My books have several levels, but I love it best, when I use words to hide a clue written in plain sight. That is Cristie-esque.”

Morris has never accepted anything simply because it is the norm. He admits, “I have enjoyed so many different careers, and seen so much of the world in the process, they seem like separate lifetimes. I always wanted to be a folk/rock star, because I’m driven to tell stories of people’s lives and loves, initially by writing lyrics. Whilst being very good at playing a 12-string acoustic guitar, I could not sing to save my life. Over time, I discovered I could write, poems and short stories at first, and then novels.”

Born in England to a local father and an Irish mother, Morris has lived in China since 2004. He has held numerous positions, from the ten years he spent as a police officer specializing in serious fraud, to entrepreneur and world trader, to writer. Early on, he qualified as a Yachtmaster for sailing vessels.

Aged forty-eight, he lost everything: his girlfriend, his home, his car, and because of that, his job. “It was a turning point. How does your mind work?” He asks. “I felt the bottom had dropped out of my life as I knew it, so after moping for a few months, I created a new life. I went to University to study Mobile Computing BSc. (Hons), and got my placement year in Foshan, China. I loved the culture, the people so much I never went back. Life is what you make it.”

After two failed marriages, he is now happily married to Siu Ying, and living in the heartland of Cantonese China. Morris is father to their young daughter, Rhiannon. Morris is not a polyglot, but he speaks Cantonese to a conversational level. Although he and his wife do not share a common language, they communicate exceptionally well. “We’ve never had an argument,” he relates. “How could we, when neither of us speaks enough of the other’s tongue.”

Morris writes about his cross-cultural experiences on his self-coded website, china-expats.com. He also designs and hosts web sites for other people and companies.

You have subscribed to alerts for John Morris.

You have been added to John Morris's favorite list.

You can also sign-up to receive email notifications whenever John Morris releases a new book.