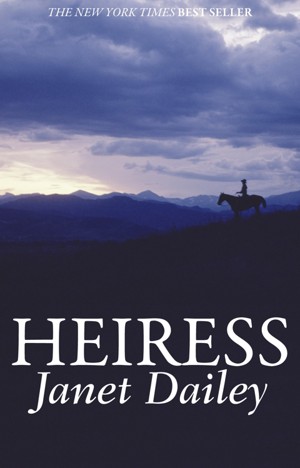 By Janet Dailey
They met at the funeral of one of the most prestigious men in the country, Dean Lawson, their father. Abbie Lawson, the dutiful genteel daughter breed in the lap of luxury and, Rachel Farr, a mistake born of a passionate love affair, are almost identical in appearance but are worlds apart. Only one daughter can be the heir to the endless oil fields and magnificent thoroughbreds.

Janet Dailey was born Janet Haradon in 1944 in Storm Lake, Iowa. She attended secretarial school in Omaha, Nebraska before meeting her husband, Bill. Bill and Janet worked together in construction and land development until they “retired” to travel throughout the United States, inspiring Janet to write the Americana series of romances, setting a novel in every state of the Union. In 1974, Janet Dailey was the first American author to write for Harlequin. Her first novel was “No Quarter Asked”. She has since gone on to write approximately 90 novels, 21 of which have appeared on the New York Times bestseller list. She has won many awards and accolades for her work, appearing widely on radio and television. Today, there are over three-hundred million Janet Dailey books in print in 19 different languages, making her one of the most popular novelists in the world.

You have subscribed to alerts for Janet Dailey.

You have been added to Janet Dailey's favorite list.

You can also sign-up to receive email notifications whenever Janet Dailey releases a new book.