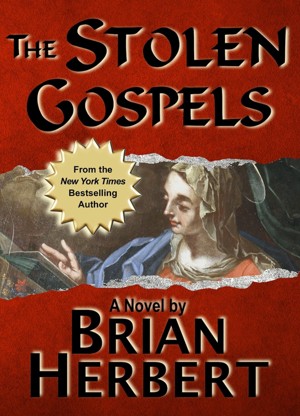 By Brian Herbert
The Holy Women’s Bible asserts that Jesus Christ had 24 apostles, and half were women. All trace of these women was omitted from the Bible by male church authorities.

Eleven she-apostles have been reincarnated in modern times and are revealing new female-oriented gospels about the life of Jesus. And the radical women have dangerous enemies. . . . More
Book 1 of 2 in the Stolen Gospels.

Lori Vale, a rebellious teenager, is thrust into the middle of a violent religious conflict when her mother is murdered, and the girl is taken to a heavily guarded fortress in an ancient Greek monastery. There, a group of radical women is creating an earthshaking religious text, the Holy Women’s Bible. The new sacred book will include the Old Testament and the New Testament, edited to alter gospels that are detrimental to the interests of women, such as passages asserting that they should obey their husbands, remain silent in churches, and suffer the burden of Eve’s sins.

A third section of the Holy Women’s Bible is the biggest bombshell, the Testament of the She-Apostles. It asserts that Jesus Christ had 24 apostles, not 12, and half were women called “she-apostles.” Eleven she-apostles have been reincarnated in modern times as female children, and are revealing new female-oriented gospels about the life of Jesus, stories they say were omitted from the Bible by male church authorities who decided what to include in the Bible and what to leave out of it, in order to assert the power and dominance of men over women.

The radical women have dangerous enemies, and Lori’s life is in grave peril, along with the lives of the remarkable female apostles of Jesus. . . .

Brian Herbert, the son of Frank Herbert, is the author of multiple New York Times bestsellers. He has won numerous literary honors and has been nominated for the highest awards in science fiction. In 2003, he published Dreamer of Dune, a moving biography of his father that was nominated for the Hugo Award. After writing ten Dune-universe novels with coauthor Kevin J. Anderson, Brian began his own galaxy-spanning science fiction series in 2006, Timeweb. His other acclaimed solo novels include Sidney’s Comet; Sudanna, Sudanna; The Race for God; and Man of Two Worlds (written with Frank Herbert).

You have subscribed to alerts for Brian Herbert.

You have been added to Brian Herbert's favorite list.

You can also sign-up to receive email notifications whenever Brian Herbert releases a new book.