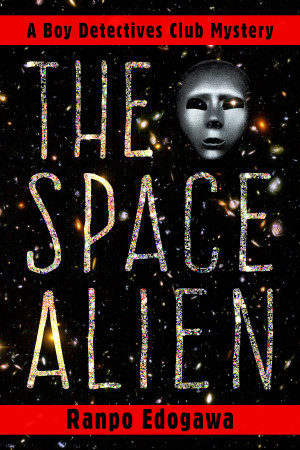 By Ranpo Edogawa
The year is 1953. Five flying saucers suddenly zoom across the skies of Tokyo. Ichiro Hirano's next-door neighbor is kidnapped by an alien lizard creature. The same creature is now stalking the pretty and talented sister of Ichiro's best friend. What in the world is going on? This is the kind of mystery that only master sleuth Kogoro Akechi and the Boy Detectives Club can hope to solve. More
The year is 1953. The Korean War is winding down. The Cold War is heating up. The United States detonated the first hydrogen bomb the year before. Godzilla will make his debut a year later. UFOs are appearing all over the world. And in Ranpo Edogawa's latest novel, five flying saucers fly right across the skies of Tokyo.

A day after that incident, a woodsman stumbles out of the forest to report the landing of an alien spacecraft in the mountains southwest of Tokyo. A month later, Ichiro Hirano's next-door neighbor goes missing. And then reappears as abruptly as he vanished, claiming he was kidnapped by a lizard creature from outer space.

That same lizard creature is now stalking the pretty and talented sister of Ichiro's best friend. What in the world is going on? What do the aliens want? And where did they come from? These are the kind of questions that only master sleuth Kogoro Akechi and the Boy Detectives Club can hope to answer.

Ranpo Edogawa is the pen name (a pun on the Japanese pronunciation of Edgar Allan Poe) of Taro Hirai (1894-1965). He is best remembered for the Kogoro Akechi and Boy Detectives Club novels, published between 1925 and 1962. His lifelong efforts as a writer and promoter of the mystery novel in Japan were well-rewarded. The mystery genre today is a staple of Japanese television and the best-seller lists. In Gosho Aoyama's long-running "Case Closed" series, the boy detective sports the nom de plume of "Conan Edogawa." Two homages in one!

You have subscribed to alerts for Ranpo Edogawa.

You have been added to Ranpo Edogawa's favorite list.

You can also sign-up to receive email notifications whenever Ranpo Edogawa releases a new book.