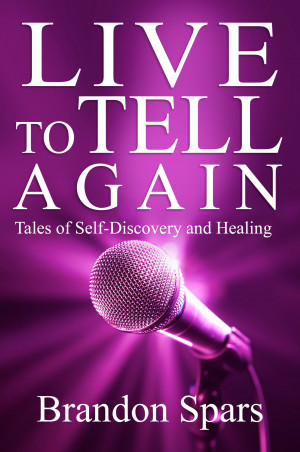 Live to Tell Again: Tales of Self-Discovery and Healing

One story even highlights the potential for storytelling to aid in the process of healing after a tragic event. The October fires of 2017 in Santa Rosa devastated a community. Live to Tell Again captures some of the stories told at a live event the author hosted called "Thicker Than Smoke," weaving them together in a way that reveals not only the personal loss suffered by the storytellers but also the hope, dignity, and humor that are helping to heal and renew the community.

Live to Tell Again provides excellent opportunities to study the structure and development of personal narrative, as well as a unique and lively manner of learning spoken English.

Brandon Spars lived and traveled in Indonesia and the Pacific Islands for six years before earning a Master of Arts in Southeast Asian Studies and a Ph.D. in Interdisciplinary Studies at the University of California/Berkeley. Since then, he has taught high school and college for more than twenty years.

The classroom has always been Brandon’s storytelling lab, where loud booms, bellows, whoops, and thumps are frequently heard. Two years ago, he took his stories outside the classroom to compete in events like the Moth StorySLAM. He won the Moth GrandSLAM in San Francisco in April 2016 with his story “Leaps,” included in this volume. Brandon lives with his wife and two children in Santa Rosa, California.

You have subscribed to alerts for Brandon Spars.

You have been added to Brandon Spars's favorite list.

You can also sign-up to receive email notifications whenever Brandon Spars releases a new book.