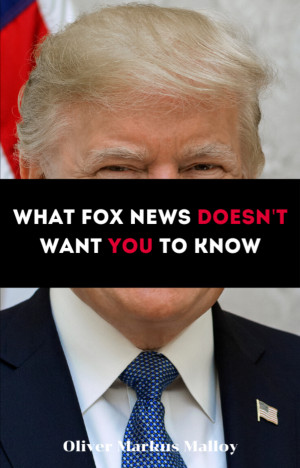 What Fox News Doesn't Want You To Know

By Oliver Markus Malloy
Dear Republican, if all the lies Fox News tells you about liberals were actually true, I’d hate liberals too. Who wouldn’t?

But that’s the thing: virtually nothing you are being told about liberals is actually true. It’s propaganda, designed to demonize liberals.

Bill Maher keeps asking the guests on his show: “Why is the D for Democrat so toxic in red states?” Most liberals honestly have no idea why you Trump voters hate liberals so much.

You’re being lied to, to make you hate liberals.

Be honest: you can barely tolerate me even using the word liberal so many times in a few sentences, because to you it’s such a toxic word. Liberals repulse you. They are barely even human, and definitely un-American, right? You think liberals are everything that is wrong with America. Liberals are wrong, bad and evil. Evil demons. America would be a much better place without liberals, right?

That extremely negative emotional response in your head was created by malicious propaganda lies you have been fed about liberals.

Here’s a short list of true facts Fox News doesn’t want you to know. And it’s just the tip of the iceberg.

Hitler and the Nazis were not liberals, not lefties, not socialists, and not democrats. Hitler and his Nazi minions were right-wing Christian conservative nationalists who hated liberals for the same reasons you hate liberals.

I know what you’re thinking: "That’s crazy talk! That can’t possibly be true! This guy is a crazy freakin' libtard!"

Well, I have news for you: it’s absolutely 100% true. And I can easily prove it to you in this short book, if you give me 5 minutes.

"Brief and accurate. Fox news is the official propaganda wing of the Republican party. Generations of lies have warped the thinking of a large part of the American public. This book is brief and free of charge with plenty of hyperlinked references."
★★★★★ -Amazon Review

Oliver Markus Malloy is a German-American novelist and comic artist. Born and raised in Aachen, Germany, he currently lives in Los Angeles, CA.

Malloy began his writing career in the early 1990s, as editor-in-chief of a computer magazine with a monthly circulation of over 500,000, which was distributed by Germany&#39;s largest publishing house. After moving to New York, he was the art director for a newspaper in Manhattan, and later the production manager for a newspaper in Brooklyn, before he began self-publishing his cartoons online in May 2000. He has never had another 9-5 job since.

About the Series: Trump Books

If you're a fan of John Oliver, Bill Maher, Trevor Noah, or Stephen Colbert, you'll love these books.

You have subscribed to alerts for Oliver Markus Malloy.

You have been added to Oliver Markus Malloy's favorite list.

You can also sign-up to receive email notifications whenever Oliver Markus Malloy releases a new book.