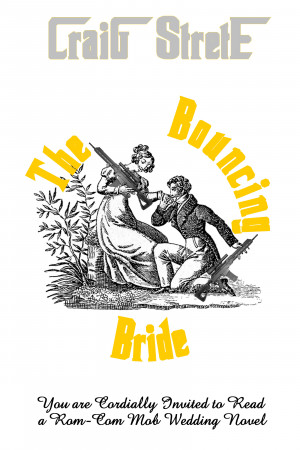 By Craig Strete
Mob daughter Jordana's wedding gets off to a rocky start with a hit in a Sandra-Bullock-esque rom-com. More
Mob boss Don Rodrico Gaspari had a standing rule, which was you don't zotz a guy in a church. Oops, but, it was the only way hitman Alphonse could do his job. Problem was, that made the church a crime scene, which made it impossible to hold the Don's daughter's wedding. Jordana Justina Lucia Mariabella Gaspari was definitely not going to be happy about that--imagine a Sandra Bullock rom-com--so the guys gotta become wedding planners and find another place real quick. Then there's the matter of the groom...
Available ebook formats: epub mobi pdf lrf pdb txt html
First 10% Sample: epub mobi (Kindle) lrf more Online Reader
pdb
Price: $3.99 USD
Buy Add to Library Give as a Gift
How gifting works
Create Widget
Tags: romantic comedy mafia mob wedding
About Craig Strete

Reviews of The Bouncing Bride by Craig Strete

You have subscribed to Smashwords Alerts new release notifications for Craig Strete.