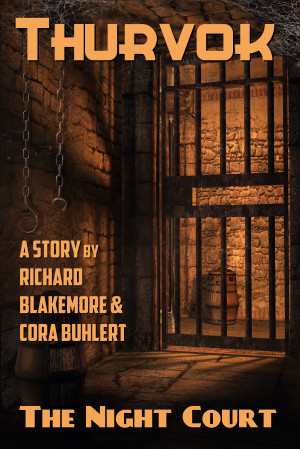 Meldom, thief, cutpurse and occasional assassin, is one of those who are snatched off the streets and put on trial by the Night Court. The accusation: murder. But while Meldom may have done many questionable things in the past, he knows that he did not commit this particular murder.

However, the Night Court is not inclined to believe him and so it’s up to Thurvok, Sharenna and Lysha to save him from the gallows.

This is a short story of 7100 words or 25 print pages in the Thurvok sword and sorcery series, but may be read as a standalone. Includes an introduction and afterword.
Available ebook formats: epub
Price: $0.99 USD
Buy Add to Library Give as a Gift
How gifting works
Create Widget
Tags: short story sword and sorcery courtroom drama heroic fantasy thief necromancy execution vigilante justice pulp fantasy swashbuckling fantasy
About Richard Blakemore

This pulpy sword and sorcery series chronicles the adventures of Thurvok, the sellsword, and his companions: Meldom, thief, cutpurse and occasional assassin, the sorceress Sharenna and Lysha, Meldom’s childhood sweetheart whom the adventurers saved from the gallows. Follow Thurvok and his friends as they travel the world, looking for loot and treasure and fighting demons, dragons and monsters.

Reviews of The Night Court by Richard Blakemore

You have subscribed to alerts for Richard Blakemore.