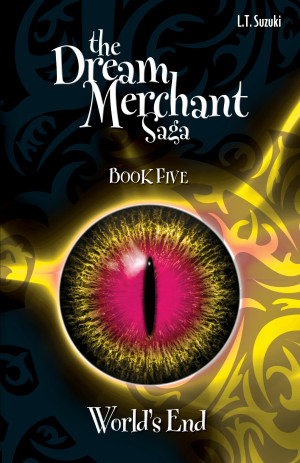 With Loken the shape-shifting Sprite taken hostage, the entire realm is threatened with total destruction. A perilous mission to save him and to capture a deadly necromancer plunges Rose and her comrades into dangers they could never imagine.

However, an unforeseen obstacle looms before them: an unwanted interloper with designs on the magic crystal is out to win the heart of Princess Rose. If he is successful, it will serve to undermine the fellowship to the doom of all.

A fan of swashbuckling adventure novels by Alexandre Dumas of 'The Three Musketeers' and 'The Count of Monte Cristo' fame, Lorna Suzuki had noticed that it was always the men going off on great adventures and enjoying the camaraderie of a brotherhood. Most often, the women were portrayed as the damsels-in-distress.

In writing the Imago Chronicles fantasy series, by adding a female protagonist, one that is reluctantly accepted into this brotherhood, the author drew on some of her own experiences as a woman in a once male-dominated field of law enforcement and martial arts to bring Nayla Treeborn the female warrior to life.

With over twenty-five years experience in various forms of martial arts, Suzuki is a 5th-dan Shidoshi (senior instructor) of Bujinkan Budo Taijutsu, a martial arts system incorporating six traditional samurai schools and three schools of ninjutsu under Japanese Soke, Dr. Masaaki Hatsumi. Although Budo Taijutsu has a very long and rich history in Japan and is steeped in tradition, is only now growing in popularity. Practitioners of Bujinkan Budo Taijutsu do not compete in the sports arena as the techniques incorporated into this system are used strictly for self-defense, never as a sport. To learn more about Bujinkan Budo Taijutsu, please visit Shihan Phillip Legare's website @ www.shinkentaijutsu.com

When Suzuki is not writing the next instalment of the Imago series or her new Young Adult Fantasy Series, 'The Dream Merchant Saga', she is a scriptwriter for audio/video life-stories customized for clients, as well as biographic documentaries for TV. Suzuki is also currently a consultant on the PBS TV series ‘West Coast Adventures’.

She resides in the suburbs outside of Vancouver, BC with her husband, Scott White, a talented, award-winning videographer and Bujinkan Dai-Shihan, and their charming daughter, Nia.

Imago Chronicles: Books One, Two and Three is currently being considered for a TV series!

You have subscribed to alerts for L.T. Suzuki.

You have been added to L.T. Suzuki's favorite list.

You can also sign-up to receive email notifications whenever L.T. Suzuki releases a new book.