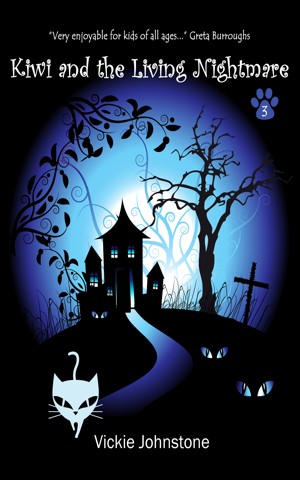 Kiwi and the Living Nightmare

By Vickie Johnstone
Rated 4.75/5 based on 4 reviews
In book 3 of the Kiwi Series, Amy, James and Kiwi embark on their spookiest adventure yet - on Halloween. What begins with an eerie dream about a three-legged cat will take the budding detectives on a quest to find an old house in the woods, meeting some perky squirrels along the way. Little do they know that there awaits a restless ghost who will do anything to stop them leaving. Age 7-99. More
Book 3 in the Kiwi Series about a magical cat.

Amy, James and Kiwi embark on their spookiest adventure yet - on Halloween. What begins with an eerie dream about a three-legged cat will take the budding detectives on a quest to find an old house in the middle of the woods, meeting familiar characters and some perky squirrels along the way. Little do they know that there awaits an angry, restless ghost who will do anything to stop them leaving. Meanwhile, Inspector Furrball and Siam discover the human world, and some surprising news.

Vickie Johnstone lives in London, where she works as a sub-editor. She has a thing about fluffy cats and also loves reading, writing, films, the sea, art, nature, white chocolate and travelling. Vickie has self-published 17 books.

Trailer for the Kiwi (the magical cat) Series
Have you ever wished your cat could talk or wondered where he/she goes when you are not around? Kiwi seems like a typical moggie, but she has a secret. She is a magical cat from Cat City. With her two humans, James and Amy, Kiwi finds mysteries and adventures, dealing with catnappings, jewel thieves, giant mice, time travel, ghosts, Santa, pyramids and more. 6 books of furry fun for ages 9-99.

Reviews of Kiwi and the Living Nightmare by Vickie Johnstone

This is the third book in Vickie Johnstone's cute Kiwi series. This time, Amy, James and Kiwi must go help a little three-legged grey kitty named Misty, who is sending them messages in their dreams.

The reverse anthropomorphism that sees the two human children turned into kittens in order to get help from the denizens of Cat City applies once again here as the kids must go get Moggie, Inspector Furball and Agent Siam to help when Kiwi is trapped along with Misty.

A cute, kid-safe story with a happy ending despite some scary moments.

Anthropomorphism is a time honored literary device in literature. And I think a vital one to employ in fiction written for children. It teaches children at a young age a certain type of empathy for all life. But beyond the value of passing on these traditions, Vickie Johnstone has created an adventurous and entertaining story for Halloween which will contributes to another important thing to pass on to our children : the simple, wonderful joy of being read to. To hear a story told aloud and receive it as a listener. I think this little volume would be a perfect excuse to engage in such an activity as the writing style is perfect for practicing narration. It's a fun activity for adults and children to practice, the lessons of which will enrich both generations greatly.

The Kiwi series by author Vickie Johnstone continues as Kiwi and her friends enter another adventure. For those who are new to the series, here is a little background. Amy and James, two kids own a cat named Kiwi, who is magical, and can turn the kids into kittens and take them to Cat City. Over the last two books, they have met a number of ‘catizens’ there, who return to this story.
This book starts with Amy, James and Kiwi having the same nightmare about a three legged grey cat, trapped in a big scary house. As they begin to investigate, they realize that the house in their nightmare actually exists and was involved in a fire. Kiwi and the kids start to search for the house and this leads them to meet a number of new animals in the forest where the house was situated. These include a robin who helps them on their way and squirrels that now live in the tree that exists at the place where the house was previously located. As their search continues, they find their three-legged cat that is named Misty, and also find the reason why she is trapped in the house.
What they do not realize is the danger lurking there, and they manage to get trapped. Amy and James somehow escape and run back to Cat City to get help. This is the only small part in the story which takes place in Cat City in this book. Most of the story plays out in the human world. I really loved the scene where the catizens get to ride on the bus. These scenes had me laughing out loud.
The catizens, along with Amy and James work hardtop rescue Misty, and after a few scary and tense pages finally succeed. In the end the mystery of the house and its ‘bad’ magic is solved, but to find out how, you must read the book.
This may be a somewhat scary story, but the adventure and the fun does not diminish one bit. And fear not, as with all good stories, the ‘good’ side wins in the end (this is after all children’s book and not high fantasy where authors relish in killing off one of their main characters).
Finally, I have to say that parents now do not need to compromise and read the ‘juvenile’ books meant for kids as here is an option which would be interesting for the kids as well as their parents. I may be an adult, but I still read each of Vickie’s stories with bated breath and expectation of new twists and newer characters in every book. With the coming introduction of illustrated paperbacks for the Kiwi series, the books may well move beyond five star category.

Book three in the “Kiwi” series, “Kiwi and the Living Nightmare” continues the exploits of Kiwi the cat, Amy and James, a host of characters from Cat City along with some critters from our world.
It was very appropriate that Vickie published the book just before Halloween because that is the time frame the story takes place. Kiwi and the kids have a dream of another cat crying out for help and discover that the haunted house where the stranded cat is at can only be entered on All Hallow’s Eve.
I like the way the author introduces new characters into book three yet draws on the previous books for the characters that I already know and love.
“Living Nightmare” has just the right amount of scary bits along with humour to make it a very enjoyable read for kids of all ages.

You have subscribed to Smashwords Alerts new release notifications for Vickie Johnstone.