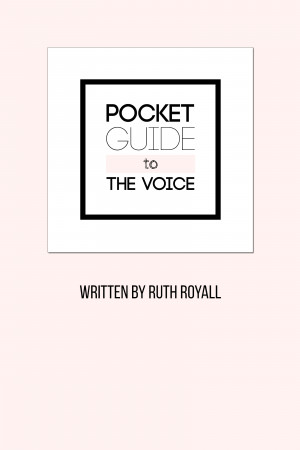 Pocket Guide to the Voice

By Ruth Royall
Pocket Guide to the Voice offers an easy and fun look at the voice, helped along by Ellie. With easy to understand exercises and digestible nuggets of anatomy and vocal function, this book will help open the door to your vocal journey.
Available ebook formats: epub mobi
Price: $4.99 USD
Buy Add to Library Give as a Gift
How gifting works
Create Widget
Tags: training fun voice activity sing anatomy vocal pocket guide
About Ruth Royall

Ruth Royall is a vocalist, songwriter and coach with many years’ experience working both in Studio and as a live singer. Ruth has worked and performed with artists such as Fred V & Grafix, Mo Pleasure (Earth, Wind and Fire), Kevin Mark Trail (The Streets), Adrian Crutchfield (Prince), Imaani (Incognito) and more. Ruth has written for commercial brands including Universal, YouTube Kids and Dove UK.

She is also a solo recording artist and has released a number of her own singles. Ruth’s voice features on the Forza Horizon 4 video game, the XFactor video game and a number of adverts broadcast worldwide.

Reviews of Pocket Guide to the Voice by Ruth Royall

You have subscribed to alerts for Ruth Royall.

You have been added to Ruth Royall's favorite list.

You can also sign-up to receive email notifications whenever Ruth Royall releases a new book.