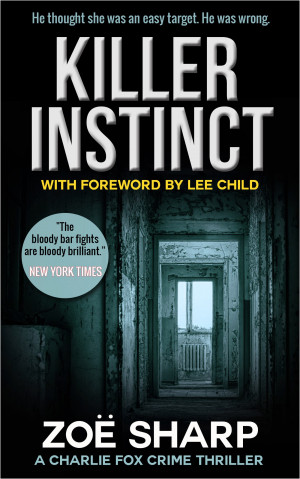 By Zoe Sharp
Killer Instinct is the first in Zoë Sharp’s highly acclaimed and award-winning Charlotte ‘Charlie’ Fox crime thriller series, complete with Foreword by Lee Child. ‘In a northern English city, Charlie Fox teaches women to defend themselves against rapists and murderers—just like the man who comes looking for her.’ *Revised and updated version* More
He thought she was an easy target. He was wrong.

After she’s kicked out of the army, Charlie Fox teaches women to defend themselves against rapists and murderers—exactly like the predator who comes looking for her.

Charlie was no good at being the nice girl her parents wanted, so she joined the British Army and acquired a whole new set of skills. And just when she thought she’d found her calling, she was dishonoured, disgraced, discharged.

Now she puts those painful, hard-won lessons to good use, teaching self-defence to battered women in a local refuge—passing on the finer points of breaking bones when running simply isn’t an option.

Her abilities come in even handier when she takes a security job on the doors at the New Adelphi, a hot nightclub with a charismatic owner.

And they come in handiest of all when her work brings her to the attention of a vicious rapist who’s stalking women at both the nightclub and the refuge. But will those skills be enough to save her—or those she cares about most?

If you like strong independent female protagonists, who will take down the bad guys without hesitation but who are still human enough to care, then Charlie Fox is definitely for you. The fantastic debut novel in a series filled with twists and turns. Highly recommended by readers, who can’t wait for the next instalment.

Author’s Note:
This is Book #1 in the long-running Charlie Fox series. If you want to find out her backstory—how and where she discovered her true killer instinct—this is the place to start. If you’re more interested in Charlie’s career as a close-protection operative, then I’d recommend you begin with either Book #3, HARD KNOCKS, when she’s undergoing bodyguard training at a school in Germany. Or when her new job starts with a bang in Book #4, FIRST DROP, when she and her teenage charge find themselves on the run in Florida.

★★★★★ PRAISE FOR ZOE SHARP AND CHARLIE FOX
*“The bloody bar fights are bloody brilliant and Charlie’s skills are formidable and for real.” ~Marilyn Stasio, New York Times
*“As action-packed and streamlined as the Suzuki the main character, a self-defense expert, rides. Zoe Sharp has an apt last name.” ~David Morrell, author of FIRST BLOOD
*“Male and female crime fiction readers alike will find Sharp's writing style addictively readable—one of the very best crime fiction sagas out there.” ~Paul Goat Allen, Chicago Tribune
*“I highly recommend this series!” ~Ian Rankin
*“Sharp's heroine Charlie Fox has to be one of the best characters in the crime thriller genre.” ~Graham Smith, crimesquad
*“Zoe Sharp is one of the sharpest, coolest, and most intriguing writers I know. She delivers dramatic, action-packed novels with characters we really care about." ~Harlan Coben
*“You have to kiss an awful lot of frogs before you meet your prince—and the same goes for crime debuts. But sometimes there's a gold nugget in all those hills of wannabe Ruth Rendells, and this is it… One of the best crime debuts for years.” ~Janice Young, Yorkshire Post

★★★★★ READER REVIEWS
“(Charlie) is cut from the same cloth as V. I. Warshawski and Kinsey Millhone, yet her history is more vivid and involving.”
“A central character who is alive and believable, wrapped up in a plot that I found totally absorbing. I'll look for more from this author.”
“When I finished it, I needed a lie down—I felt like I'd been there with Charlie every step of the way!”
“Now I know why people were talking about Zoe Sharp and I will be among them next time…” I am dead chuffed that I can now add another female British crime writer to my list of must reads. Fantastic start to a series.”

Zoë Sharp was born in Nottinghamshire but spent her formative years living on a catamaran on the northwest coast of England.

After a promising start at a private girls' school, she opted out of mainstream education at the age of twelve. She wrote her first novel when she was fifteen and created her no-nonsense ex-Special Forces turned bodyguard heroine Charlie Fox after receiving death-threat letters in the course of her work as a photojournalist.

Sharp’s short stories have been used in school textbooks and turned into short films, and the Charlie Fox series has been optioned for TV and film.

Her work has been nominated for numerous awards both in the UK and the USA, and her short stories have been published in anthologies and magazines such as Ellery Queen Mystery Magazine and Strand Magazine.

A keen library supporter and public speaker, she blogs regularly on the acclaimed group website www.MurderIsEverywhere.blogspot.co.uk. She also witters on Twitter (@AuthorZoeSharp) and fools about on www.Facebook.com (ZoeSharpAuthor).

Zoë currently lives in the English Lake District. Her hobbies are sailing, fast cars (and faster motorbikes), target shooting, travel, films, photography, music, occasional construction projects and reading just about anything she can get her hands on.

You have subscribed to alerts for Zoe Sharp.

You have been added to Zoe Sharp's favorite list.

You can also sign-up to receive email notifications whenever Zoe Sharp releases a new book.