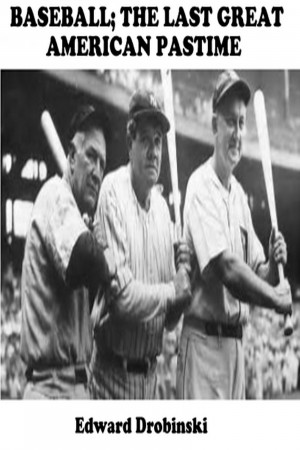 By Edward Drobinski
A consolidated history of the game and its parallels with America as a whole, intended for those new to the game who'd like to know how it got that way and the casual fan who watches 20-30 games per year.
Download: epub mobi (Kindle) pdf more Online Reader
lrf pdb txt
Price: Free! USD
Add to Library
Create Widget
Tags: baseball baseball history 1930s baseball baseball start baseball stats baseball game negro baseball 1920a baseball american pastime relief pitching
About Edward Drobinski

10-02-20. I have a small request. I make my books available freely here on Smashwords, and I hope that some enjoy them. However, I absolutely detest what the BLM-Antifa-“Democrat” conjunction stands for; further aided and abetted through their full agreement with the colluding co-operation clearly shown by the monopolistic, Dem-protected, e-purveyors of edited BS. I request that if you identify with this group, you do not download any of my property. I would feel horrible if I thought that I was giving gifts to the enemy. Further, if this compels you to write negative reviews or carpet bomb my books, please feel free. It’s not new to me, I don't care, and your miniscule opinions have no relevance to anything, with the possible exception of your deluded self. Thank you.

It was reported today that White House Press Secretary Kayleigh McEnany showed little sympathy Thursday (yesterday) for teachers expressing concerns over their safety heading into school re-openings as the coronavirus outbreak persists in many areas of the country.

When asked about teachers going on strike, McEnany compared them to "meat packers."

This writer would like to go on record as joining the criticism of Ms. McEnany. By now, she should have learned to be more openly respectful of meat packers. If such careless speech was taken to be directed at one of the organized sacred-cow-groups this could have led to “righteously” tolerated riots, looting, arson, and further law enforcement injury in the weak-kneed, criminal-loving, Dem-libtard cities. Totally inappropriate and appalling!

3-21-20. Getting wrapped up in what seems more important than books. Books are great, but this Chinese Bat Challenging Virus is getting all the headlines now. Yeah, I said Chinese and bat; the same sources of the 2003 SARS virus. Verify that if incredulous.

Empirical evidence – The coronavirus can spread to 100% of the world’s population, killing 2-3% of it, and perhaps worst of all obliterate tons of money. The response of the medical authorities has been one which might slow its exponential growth rate to 60 MPH; thereby allowing it to run its course at a reduced speed, obstructing any and all low risk remedies with unquestioned impunity. The priority of social media commentators has been to use their time to milk the situation to make stupid politically oriented remarks about Trump, rather than question the thwarting authorities.

Comment – Social media commentators could just as easily post remarks of times when medical authorities did stupid things like not wash their hands before operations and apply leeches to the sick. More currently, Fauci must have been absent when the med school instructors explained the difference between a medicine and a vaccine. Either that or it went over his well-below-average-height head. A possible way to be part of the solution rather than part of the problem is to point out medicine’s mistakes and demand they release the safe possible coronavirus remedies available. If they continue to be unreasonable, further options include taking away their authority, or killing them.

Simple and indisputable; wouldn’t you say?

3-19-20. I've been meaning to blog here for some time, but have been overwhelmed by the news of the day, and the unasked questions no one has yet dared asked the ineffectual medical authorities; their "actions" some might characterize as obstructive; the fringe saying the exploding, bat-eating, Chinese Virus pandemic is being used as a diversionary device intended to promote further western interdependence and close relations with those not yet well-versed in healthy dietary considerations, apparently not interested in how that affects others than themselves.

My writing has suffered an inability to concentrate on the fiction when the reality is overwhelming, but so such entertaining diversions should. I really don't care, and hope you also only care about the important things.

Posted on GR this AM. Consider this potentially good news of a Trump announcement of a possible coronavirus cure; already in existence with all required approvals. The url has now been deleted by someone or something.
Let's see how the useless, stupid, midget at WHO tries to fuck this one up.

Less than 3 hours later. Surprise, surprise. My naivte is quite an embarrassment. WHO sister affiliate "expert" has many reservations and suggests more testing of a drug they approved a half century ago. "Test, test, test, and sequester" is apparently preferable to approved potential cure. …………. Hehehe. Are these people worth taking seriously? They must be joking. ………….. A conspiracy nutter might suspect a different agenda.

In the face of an exponentially increasing merchant of death, it seems so simply true to say "Ignore those WHO would find 'reasons' to obstruct," that current obstruction that of one of their own approved medications.

One militaristic in reviled, but needed background might just say; "Off with their heads."

Be safe and well, but also realize that the longer you allow the authorities to dictate your options, the sooner you will have none.

8-2-19. I started writing upon retirement about eight years ago. With that, I continued my lifelong pattern of getting a fast start and then fizzling. Hehe. This time it was just a hobby. I continue on, my primary intent, other than engaging in a cost-free, time filling dalliance, is to give the reader a pleasant, few hours experience; intended entertainment value, as opposed to anything more meaningful, my priority.

Unlike most indies, I don't get upset if you don't like the book. I'd rather you did, but if you don't just cut it after 5-10 pages. No one is obliged to suffer.

Not counting one baseball book, I write fiction. Different topics are covered, but there is a disproportionately slight weighting toward crime and talking animals. The latter was first intended to be for children, but it turned out to encompass others as well.

P.S. Sometimes a delivered indie document is not all it should be; fault widespread. Mostly mine, as without effort or intent, I'm a computer klutz. If quality issues are your case, just e-mail me at sumcanps@aol. com and I'll be glad to forward an apology and a good pdf, doc, docx, html; mobi a problem. PDF seems to work well regularly reasonably well whatever the source; and the rest sketchy.

A gigantic thank you to Smashwords for kindly granting the indie maximized options under the constraints of the IT stuff. That is a commentary directed at the net in general or me only , as if it takes more computer work to maximize sales, I just won't maximize them. As a retiree that's OK; at most a 61 year old's, 70 re-write of a "youth" inspired, Edonistic ignorance. "Why do we have to grow old?"

9-10-19. I am most appreciative of the Smashwords' tech help I've thankfully received mostly regarding the required formatting, which is quite difficult without prolonged personal attention for one not computer savvy, like me and most of the post millennials. Thank you Smashwords and thank you Mr. Coker. As far as I'm concerned your efforts have provided a venue wherein indies have been given a mike.

It seems a seductive shame that other sites seem to make things easier while their results provide nothing more than an illusory, provocatively simple entrée into lit. It is a further shame that their easy and seductive jokes continue their intended, totally mercenary, shame engendered is still mathematically confirmed.

I guess that the best we can do is laugh.

Later that day. Hi again. Don't want to seem so serous. ……………….. Mostly. To be compelled to do that eliminates one from the "cool' list and minimizes the parties to which one is invited. It's kind of a convoluted, non-obvious story; but one which those who have been there quietly understand, while those who have not been never can. It's not their fault to have been given attributes which are consistent with the notion of the popularity we all lie about desiring, saying that it doesn't matter, with some degree of momentary "truth," which negates every pre-dawn vision/dream we dream in a sun-hidden nirvana, most prompted by the wonderful, innocent kitten who just seeks play, food, and refreshed water; thankfully disturbing our sleep with the periodic claw they gradually come to understand can hurt and hold back and thereby on.

The cats sleep while it is light; so I guess the best thing I can do during the day, is something which might have something to do with someone's idea of lit or attempts at an entertainment dismissed, shortly after the pretension taken as implied wears off, with its wrongfully construed sense of being unique; that mis-stated thanks to the inadequacy of words.

Hey readers. Peace and love. It's really much simpler than the words make it sound. Trust me? I wouldn't.

You have subscribed to alerts for Edward Drobinski.

You have been added to Edward Drobinski's favorite list.

You can also sign-up to receive email notifications whenever Edward Drobinski releases a new book.