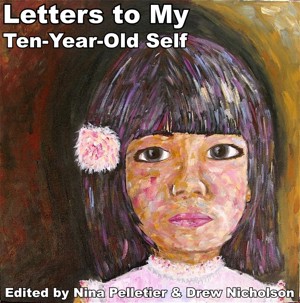 Letters to My Ten Year Old Self

By Nina Pelletier & Drew Nicholson
Rated 5.00/5 based on 2 reviews
If you could write a letter to your 10-year-old self, what advice would you give? Which lessons do you wish you didn’t have to learn the hard way? What message do you feel would have made the greatest impact on your life? More
"Letters to My Ten Year Old Self" is an anthology of letters from people of all ages to their younger selves. Here you'll see humor, anger, loss, and love. These aren't writers perfecting their craft, these are people pouring out their hearts onto the page. Come and read, and you will find yourself immersed in memories... some of them even your own. What would you write to your Ten Year Old Self? Read this book, and maybe you'll find out.
Download: epub mobi (Kindle) pdf more Online Reader
rtf lrf pdb txt
Price: Free! USD
Add to Library
Create Widget
Tags: childhood forgiveness letters childhood remembrance future life hopes and fears forgive yourself regrets childhood dreams childhood hope
About Nina Pelletier & Drew Nicholson

Nina Pelletier is a full-time writer who lives in Ontario, Canada. She is the creator of the Prompt-and-Share, which brings writers together in an enthusiastic and encouraging forum. Nina is the co-founder of the soon to be online Scriptorum Tantillum publishing house. When she’s not prompting, editing, providing feedback, reading, blogging or writing, she can be found playing with her canine companion, Princess Trixie. She can be found at her blog (http://writingofanovel.blogspot.com/) and on Google+ (http://writingofanovel.blogspot.com/).

Drew Nicholson is an early-middle aged geek. He’s happily married the second time around, and has two fantastic sons. He’s a die hard Cubs fan, which contributes to his pathos, which makes being a poet marginally easier. He directed the Great Google+ Art Experiment video (http://writingofanovel.blogspot.com/), which led directly to him being appointed Art Director of Sociolog+ (http://sociologyplus.com), where he curates an arts community made up of painters and sketchers, musicians and songwriters, poets and videographers. Circle him on Google+ (http://writingofanovel.blogspot.com/), where he writes poetry and short stories while engaging in some of the best conversations on the net. He’s also the co-founder of the soon-to-be-online publishing house Scriptorum Tantillum, of which this is the first issue, and has been published on CuriosityQuills.com. He harbors a deep love for Star Wars, Star Trek, Firefly, BSG, Horatio Hornblower, Farscape and David Brin novels, as well as a new found love for scotch to go with his long love affair with good beer. He lives near Chicago, Illinois.

I enjoyed all the entries - each had a very unique voice.
Am also very priviledged to have been able to contribute. Good job, Nina and Drew!

Fabulous!! Nicely done. I really appreciated being able to contribute to this book. It's heartwarming to see peoples real words about their lives. :)

You have subscribed to alerts for Nina Pelletier &amp; Drew Nicholson.

Would you like to favorite Nina Pelletier &amp; Drew Nicholson?

You have been added to Nina Pelletier &amp; Drew Nicholson's favorite list.