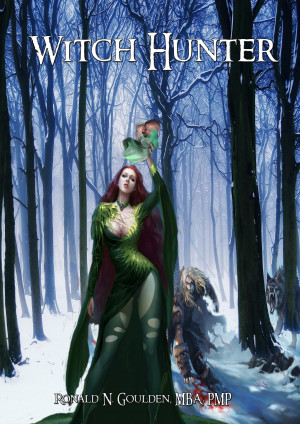 By Ronald N. Goulden, MBA, PMP
Jack Mitchell uses his wits and guns to battle Satanic forces bent on the destruction of our world. More
Jack Mitchell is an adventurer and occasional bank Vice President who battles evil and Satanism when not dealing with computer problems at work.

With a past tinged by witchcraft and forged in war, he fights satanic evil in his own fashion, often without regard for human laws. His self-appointed mission is to stop the practice of human sacrifices and the spread of Satanism.

Becoming disheartened, he considers resigning from his adventures and pursuing a budding romance with a fellow worker, Denise Coles. However, his life becomes more complicated when he discovers a coven of powerful witches in his own bank.

The powerful young witch, Laurie Nevins, leads the attacks against him and threatens to steal his new-found love as a sacrifice for her covens. The intensity of her attacks grows in proportion to the growth of her powers, forcing Jack to struggle with increasingly violent attacks while trying to preserve his conservative image at work.

One snowy night, Laurie stages a life-ending attack upon Jack, apparently leaving Denise defenseless and vulnerable. Her elation at Jack’s death is short-lived as she learns that the adventurous banker is not an easy kill.

Jack enlists the aid of a friend and takes the battle to Laurie and her three covens as she attempts to sacrifice Denise during a blizzard. As the night wears on and time runs out, Jack battles the three covens and attempts to rescue Denise. The two lovers discover new strength of character as the powerful witch uses her vast repertoire of power and magic to end their lives.

Ronald Goulden has written novels and stories for thirty years. Having served in Viet Nam as a Translator/Interpreter, He quickly adapts to new cultures and sees a story or an adventure everywhere. He has ‘dabbled’ in witchcraft, though he is not a witch.

All of his novels and stories have interconnecting threads that link them into a larger universe, spanning space and time. Some of the links are obvious, while others are very subtle.

Some of the events in the stories are based on real life, while others are pure fiction. The distinction between fact and fiction is up to the reader.

Having studied witchcraft many years earlier, it had always been in my mind. When I became an IT Director for the Farm Credit bank system in Wichita, I observed the ‘power’ a small group of ladies expressed over others in the bank and their general disdain for many of the men.

I had also researched the BTK Killer during his spree and developed a program that allowed me to ‘predict’ his next attacks. As such, I saw the potential for violence in anyone.

After being treated rather rudely by the band of bank beauties, I decided to write a story to explain their odd and overbearing personalities. Using newspaper stories and personal experiences, I settled on baby sacrifices and Satanism.

While the personalities and physical attributes are based upon real people I knew at the time, their involvement is this story is purely fiction. There are many ‘links’ in this story to the other novels I’ve written over time, essentially building an alternate universe.

You have subscribed to alerts for Ronald N. Goulden, MBA, PMP.

Would you like to favorite Ronald N. Goulden, MBA, PMP?

You have been added to Ronald N. Goulden, MBA, PMP's favorite list.