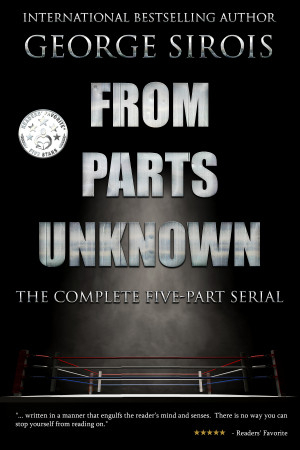 By George Sirois
Abduction. Betrayal. Conspiracy. Murder.
Welcome to the future of sports entertainment! More
Out of work. Out of insurance. Out of options.

All Stephen Barker wants is to provide a better life for his wife and child, and his only answer is to become a star in the last remaining sport in America, the Gladiatorial Combat League. But while Stephen's intentions are noble, he has no idea that the GCL is becoming more and more corrupt behind the scenes.

The current World Champion, Kyle Flyte, is forced to deal with constant rule changes proposed by the head booker Vornakai, including the use of weapons in the ring. But Vornakai is keeping his latest plan to usurp the championship a secret from everyone. If it works, it will turn an ordinary man into a weapon to tear through the GCL ranks. All he needs is a test subject.

George Sirois has yearned to be a storyteller all his life, no matter the medium. That drive first led him to drawing his own characters while in grade school, and then - when his skills never advanced beyond the most primitive sketches - writing about them in various short stories and screenplays before moving on to novels such as “Excelsior” and the five-part serial “From Parts Unknown.” He is a regular contributor to Write Pack Radio (www.windingtrailsmedia.com) and was named President of the Missouri Writers Guild in May 2017.
After living in New York City and Richmond, Virginia, George, his wife, and their two dogs now happily call St. Louis, Missouri their home. In his spare time, George is an avid cinephile, a collector of film scores, and a lifelong fan of the New York Giants. He enjoys West Coast Swing dancing, and is currently pursuing work as a voice actor & audiobook narrator.
“Excelsior” and the first of two sequels - “Ever Upward: Part Two of The Excelsior Journey” - are available through Aelurus Publishing: www.aeluruspublishing.com.
George&#39;s Twitter handle is @GeorgeSirois and his Facebook page is www.facebook.com/excelsiorbooks. For more information, go to www.hesgotit.com.

You have subscribed to alerts for George Sirois.

You have been added to George Sirois's favorite list.

You can also sign-up to receive email notifications whenever George Sirois releases a new book.