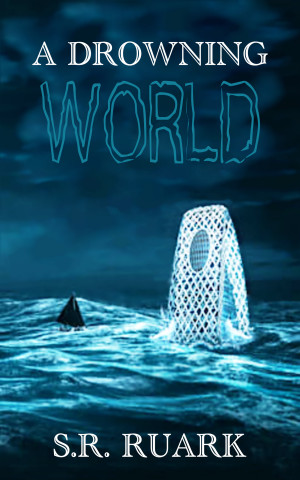 By S.R. Ruark
Rated 5.00/5 based on 1 reviews
A Drowning World is the first book in the Siren series, and the second novel from author S.R. Ruark. Known for her vivid manner of storytelling, Ruark never disappoints. More
In a universe inhabited by gods, freemen, and slaves, life is especially cruel & harsh. But things only go downhill when Lauranya and her daughter Ari find themselves abandoned on a planet where the fast rising tide will force them to higher ground. The only problem; the highlands are populated with a dizzying array of nightmarish creatures.

Left for dead, Lauranya and her daughter, Ari, struggle to survive on this bleak world. Even beyond the rising tide, and carnivorous fauna, the Drowning Planet is home to dozens of former rebels; all of which would enjoy seeing them both dead.

Meanwhile, in the skies above, gods and ethereal beings battle for possession of Ari’s powers. As a necromancer, her growing abilities allow her to blur the line between life and death in ways that make her a valuable commodity, even to the gods themselves.

An SCA enthusiast with a wide range of friends and interest including but not limited to fencing, dancing, cooking and reading anything not being sat on by a cat.

I've been itching to buy this book since I helped edit the manuscript five years ago. I still dream about this book! I am beyond excited to finally get to own it.

As for the story itself, it has a wonderfully written do or die main story acted out by a stranded scientist and her daughter on a world with a rainy season that literally covers the majority of its surface with a deep vast sea. A tourist destination for the ultra wealthy and a world of wonder for scientists during the dry season, all must leave when the rains start. Betrayed and abandoned, mother and daughter must race against time, the elements, and the indigenous animals fleeing the rising water to survive. The top suite of the tallest luxury hotel on the planet may end up being just a gilded tomb if they can't figure out a way to feed themselves for the months to come.

And while that nail biting drama is going on, there is a giant space war going on in the background that encompasses monsters, demons, aliens, magic, zombies, shape changers, time travelers, reincarnation, prophecies, and hard science. There are also those hiding from the God dynasties who are making moves in the war like they are playing a giant game of four dimensional chess. Honestly, it's all brilliantly handled.

You have subscribed to alerts for S.R. Ruark.

You have been added to S.R. Ruark's favorite list.

You can also sign-up to receive email notifications whenever S.R. Ruark releases a new book.