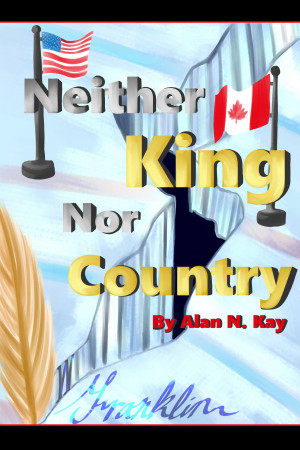 Neither King Nor Country

Ben Franklin's greatest secret is discovered by an above average, beer league hockey player and family man Rob Callahan. But Rob wants no part of this mystery while his family is falling apart. What secret has he found that will change America, Canada and the very fabric of American Patriotism; and who is the greatest traitor in America that no one wants to remember? More
A traitor worse than Benedict Arnold…

In 2019, Rob Callahan was a man who wore many hats; Father, teacher, hockey player, husband and friend. He lived his life in a delicate balance and he lived it to the fullest.
His teammate Lindsey Craig loved being one of the guys. She had played hockey all her life and never let anyone stop her from following her passion.

“I have recently gathered in my possession, various documents and letters from my father concerning the most recent Treaty of Paris…”

Rob and Lindsey had no idea what the words meant but they knew they must be important; Benjamin Franklin? A bastard son? The American Revolution? Loyalists? Canada? A secret treaty? Even an international border crisis?

So despised he was erased from history…

There was no time for any of this. Rob’s marriage was falling apart, his boys were taking different sides in a family civil war and the only thing keeping him sane- his beer league hockey team was about to fall apart if he and Lindsey made the wrong move.

It was a secret that could tear America apart, that went back to the Founding Fathers themselves.

But where did their loyalties lie? Should they honor Rob’s grandmother and follow this crazy historical trail? Should they just ignore the secrets and each other to keep Rob’s family together? Or should they follow their heart, their passion and just let the chips fall where they may? How could they resist? How could they ignore one of the greatest secrets in America, a secret buried for more than two hundred years?
Available ebook formats: epub mobi pdf lrf pdb txt html
First 20% Sample: epub mobi (Kindle) lrf more Online Reader
pdb
Price: $5.99 USD
Buy Add to Library Give as a Gift
How gifting works
Create Widget
Tags: hockey ben franklin genealogy us history loyalists canada history historical fic revoloution
About Alan N. Kay

Reviews of Neither King Nor Country by Alan N. Kay

You have subscribed to alerts for Alan N. Kay.

You have been added to Alan N. Kay's favorite list.

You can also sign-up to receive email notifications whenever Alan N. Kay releases a new book.