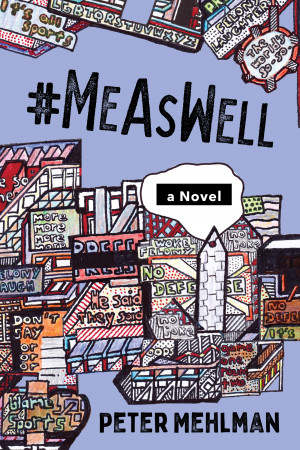 By Peter Mehlman
#MeAsWell, A Novel, examines the inner and outer turmoil that results when a well-meaning but iconoclastic public figure, having failed to update his cultural operating system, unwittingly runs afoul of the new rules of woke America. It is is the second work of topical, humorous fiction from Peter Mehlman, a longtime writer/producer for the iconic television show Seinfeld. More
Arnie Pepper is having the worst day of his life. The Pulitzer-prize winning sports columnist for the Washington Post has lived a thrilling, prestigious and (mostly) blameless existence over nearly four decades of rubbing shoulders with athletic royalty at all the most prestigious sporting events of our times. Then one day, within the confines of an impromptu gathering of fellow reporters, he tosses out a characteristic one-liner. Overheard and subsequently posted on social media, his joke goes viral. The ensuing hurricane of condemnation threatens to take his job and reputation, alienate his daughter, and decimate his obsessively observed inner world.

#MeAsWell is the second novel from Peter Mehlman, an essayist, artist, comic, filmmaker, and longtime writer/producer for the iconic television show Seinfeld. At once surreal and too real, laughable and on point, the novel examines the inner and outer turmoil that results when a well-meaning but iconoclastic public figure, having failed to update his cultural operating system, unwittingly runs afoul of the new rules of woke America.

In everyday interactions, and especially in his popular columns, Pepper’s sense of humor has always been his fortune—the gateway to a comfortable life as a journalist and enriching friendships with everyone from Billy Jean King to Barack Obama. An early proponent of Title IX–and a devoted single father of a daughter–Pepper has long been a champion of women’s sport. But now, despite his best intentions, he finds himself in the eye of a media storm that is turning darker and more dangerous, his life threatened by a hilarious retort—or at least it seemed hilarious at the time.

“Mehlman’s narrative is spirited, political, and both hilarious and sadly reflective of the digital culture that can befriend or betray on a whim. A witty, culturally perceptive dark comedy.”–Kirkus Reviews

Price: $10.99
$7.69 USD
Buy with coupon Use the code AGB30 at checkout for 30% off during our site-wide promotion!
(Offer good through April 20, 2020 )
Have a better coupon?
Add to cart, then apply your coupon
Add to Library Give as a Gift
How gifting works
Create Widget
Tags: comedy humor satire sports sportswriter washington dc current events seinfeld gender gap washington post
About Peter Mehlman

After graduating from the University of Maryland, Peter Mehlman, a New York native, became a writer for The Washington Post.

He slid to television in 1982, writing for SportsBeat with Howard Cosell . From 1985-90, he returned to forming full sentences as a writer for numerous national publications, including The New York Times Magazine , GQ , and Esquire .

In 1989, two years after moving to Los Angeles, he became a writer for the iconic TV show, Seinfeld . Over the eight-year run of the show, Mehlman rose to executive producer and coined such well-known Seinfeld-isms as “spongeworthy,”
“shrinkage,” “double-dipping,” and “yada, yada,” the last of which has been included as an entry in the Oxford English Dictionary.

In 1997, Mehlman joined DreamWorks and created It’s Like, You Know… a scathing look at life in Los Angeles. In recent years, he has written screenplays, novels, and humor pieces, many of which were collected in his book, Mandela Was Late.

Mehlman has appeared on-camera for TNT Sports and the Webby-nominated Peter Mehlman’s Narrow World of Sports. He’s the creator of the lifestyle brand Bravely Oblivious. He lives in Los Angeles.

You have subscribed to alerts for Peter Mehlman.

You have been added to Peter Mehlman's favorite list.

You can also sign-up to receive email notifications whenever Peter Mehlman releases a new book.