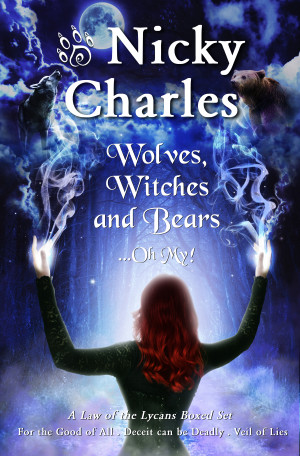 Wolves, Witches and Bears...Oh My!

By Nicky Charles
Rated 5.00/5 based on 6 reviews
Wolves, Witches and Bears brings you three epic novels in one boxed set! Meet Stone whose heart is as hard as his name, Dante, a dashing rogue with mysterious motives, and Armand, a man mourning his lost love. Will the women they encounter be their salvation or their downfall? Danger, intrigue, humour and true love can always be found in the highly acclaimed Law of the Lycans series! More
Discover three epic novels in this boxed set entitled, Wolves, Witches and Bears …Oh My!

The first book, For the Good of All, introduces Elijah Stone, a man as hard as his name. Can a psychedelic witch break through his walls or will duty force him to deny his heart?

In Deceit can be Deadly, Gwyneth O'Donnell, a respected member of the Universal Coven, despises all Lycans. When Dante Esparza darkens her door, does she dare trust the motives of the dashing rogue?

And finally, Veil of Lies will have you wondering, how much is too much to forgive? Armand St. John is a bear shifter whose heart runs deep and true. But when love and lies are pitted against each other, can anyone win? 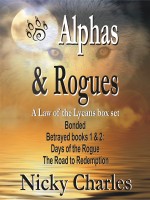 Reviews of Wolves, Witches and Bears...Oh My! by Nicky Charles

The Law Of The Lycans series is one of the best series of its kind.
I love Nicky Charles and all of her books.

(reviewed 37 days after purchase)
memwolf reviewed on July 2, 2020
(no rating)
I have been enjoying reading all of her books.

I enjoyed reading this book and the rear of the books Nicky has written.

I love all of Nicky charles books. This is very well written.

Nicky Charles continues to write exceptional paranormal stories that have me mesmerized, and these stories were no exception. Each one had me hooked from beginning to end. I devour every book she writes and will continue to anxiously await her next book.

I have enjoyed all of Nicky's books. Excellent writer!

(reviewed 22 days after purchase)
susani reviewed on June 11, 2020
(no rating)
This was a very enjoyable book. Nicky Charles weaves a wonderful tale. I have now read this for the second time and I still love it!