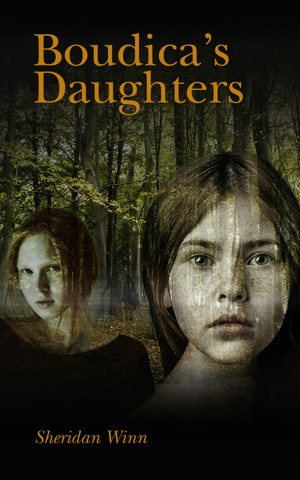 14-year old Lilla’s psychic power sets her apart from others. Often doubted, she is the clumsy younger sister to Janey’s swan. In the sweltering July heat the Harrison family move to Grove End, an old farmhouse deep in Norfolk’s Breckland. Two thousand years ago the area was home to the Iceni tribe and their Warrior Queen, Boudica. Now, Nighthawks – illegal metal detectorists – are searching the woods for Iceni treasure. When Lilla sees the ghosts of Boudica’s daughters, she learns the trees hide an ancient mystery.

Janey’s arrival brings upset as she reveals her own dark secret. Overwhelmed by a sense of failure, she no longer knows who she is or what she wants. Shocked and struggling to cope, her parents try to help but are wrestling with their own feelings.

It is Lilla who must find the strength to help her sister. With Boudica’s daughters as her guides, her journey takes her into the ancient past and tests her sense of self-belief to the limit. Can Lilla save her sister and lay the Iceni bones to rest?

Sheridan Winn lives in a village in Norfolk, England.

As a freelance journalist she has written for a wide range of international publications and is known for her profiles of business leaders.

As an author, she is known for her bestselling Sprite Sister books aimed at readers aged 7-13 years. The series has been particularly successful in Germany, where publisher Fischer Verlag has sold over half a million Sprite books. The books are currently being developed for a series of films.

The Sprite Sisters – four sisters, four elements, four powers – describe the magical adventures of Flame, Marina, Ash and Ariel, who have the powers of Fire, Water, Earth and Air. The stories are based partly on Sheridan’s childhood experiences as the eldest of four sisters growing up in Norfolk countryside.

A lively and engaging speaker, Sheridan enjoys the chance to interact with her readers. She has two grown-up children and a granddaughter; a keen interest in the Arts – particularly photography, painting and film – and finds walking in the countryside a good way to think up ideas. She always carries a notebook.

You have subscribed to alerts for Sheridan Winn.

You have been added to Sheridan Winn's favorite list.

You can also sign-up to receive email notifications whenever Sheridan Winn releases a new book.